You are here: Home>Places>Church of the Immaculate Conception>Oughterard's Harry Clarke Window 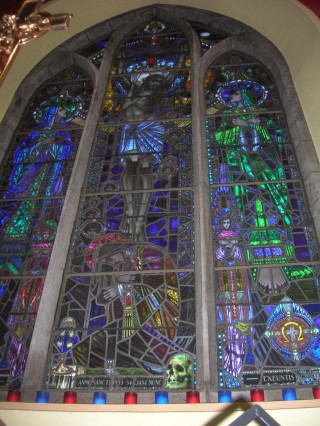 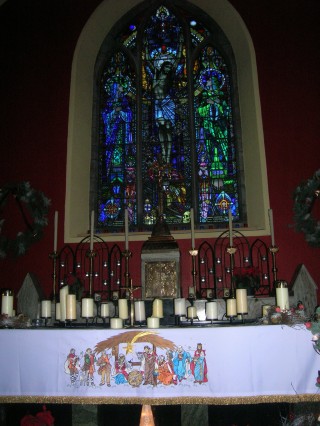 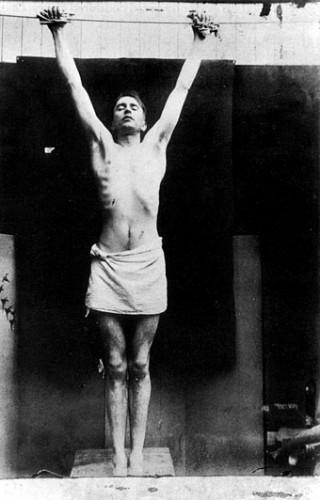 Harry Clarke posing in his studio, for a design of Christ 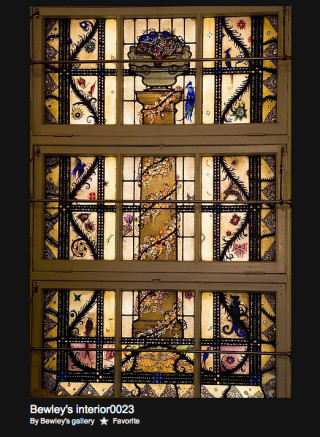 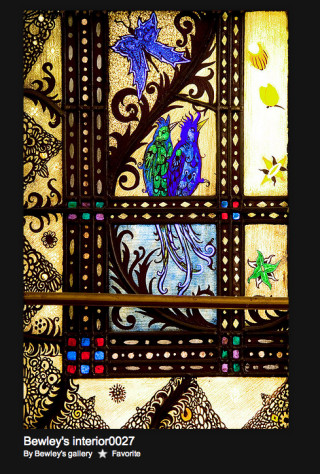 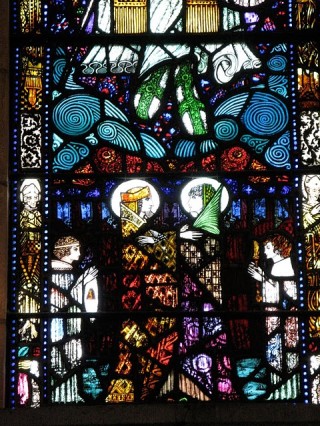 In January 1879 a fire destroyed most of the church of the Immaculate Conception. Between 1932 and 1934 Archdeacon Mark Conroy P.P. reconstructed the church. The altar was moved from under the gallery to the north wall and the magnificent Harry Clarke window depicting the Crucifixion was installed behind the altar. The first and the last letters of the Greek alphabet – alpha and omega (the beginning and the end) are in two panels on the left and right-hand bottom corners.

Who was Harry Clarke?

Harry Clarke (1889-1941) was Ireland’s greatest stained-glass artist and book illustrator. His religious windows still emanate spiritual power and beauty in Catholic and Protestants churches all over Ireland. The books he illustrated were very popular in their time, two of the most successful being Hans Christian Anderson’s Fairytales sand Tales of Mystery and Imagination by Edgar Allen Poe.

Joshua Clarke, his father an 18- year-old English Protestant arrived in Dublin penniless in 1877. He was hard working ambitious and shrewd. He saw that church building was at its height and was attracting skilled workers including the father of Patrick and Willie Pearse also an Englishman.

He converted to Catholicism when he married Bridget Mac Gonagle a catholic from County Sligo. Within a few years he had his own company “Joshua Clarke and Sons”. He had two daughters and two boys Walter and Harry who were born, coincidently, on March 17th St Patrick’s day two years apart Walter 1887 and Harry 1889.

The boys were very close to one another and were alike in many ways: tall good-looking, gentle and whimsical. By coincidence they married two sisters Margaret and Minnie Crilly from Newry and by tragic coincidence they died in their early forties within six months of each other. They were educated at Belvedere College where Harry was somewhat shy and studious but noted for his clever caricatures.

Although Joshua had little formal education and no particular interest in art, as an entrepreneur he could see that in the production of stained glass would ideally complement his church decoration firm, so in 1892 he opened a glass studio in rooms in the family spacious home in North Frederick St., Dublin. Harry was fascinated and soent so much time there that by the time he was 14 he was proficient in the craft.

Fortunately for Harry, Joshua admired his talent, recognized his potential and fostered it in every possible way. Harry studied art and stain glass at the Dublin Metropolitan School of Art where he won the highest award for his work. He studied the stain–glass of the mediaeval cathedrals of France during his stay in France.  On returning to Ireland Harry used Joshua’s studio facilities for which he paid his father, but he only took on commissions in his own name. He gained a reputation for his highly distinctive work.

The Demise of the Church Decoration Business

When Joshua died in 1921 Harry took over the running of the business as well as his own work, which meant he had a permanent overload. Over work led to a serious deterioration in Harry’s health in the late 1920s Walter assisted Harry in every way possible as the brothers were very close to each other.

But time had run out. In July 1930 Walter died suddenly of pneumonia and the Clarke church decoration business died with him. Harry already ill with TB, died in Switzerland six month later in January 1931. He was buried there at his own request but there is no longer any trace of his grave. It was “vacated” in 1950 and the headstone destroyed. No one had explained to Margaret, his wife that she would have to pay again after 15 years to retain it. Apparently, this was not unusual on parts of the continent.

The studios continued to design and excute windows in Harry’s style and supported two Clarke sisters, two Clarke widows and nine grandchildren until 1973 when Harry Clarke Stained Glass Ltd finally closed due to lack of business, a consequence of the directive of the Second Vatican Council, which encouraged expenditure on education rather than on embellishment of churches.

Many people have had coffee, perhaps without realizing it, under windows designed by Harry Clarke in the room called after him on the ground floor of Bewley’s Grafton Street. Others will be familiar with the exquisite windows in Newport, Achill and Lough Derg churches. The 11 windows depicting Irish Saints in the Honan Hostel chapel, Cork in the grounds of UCC are regarded as his best religious work.  This chapel must be seen, especially now as the whole chapel, a treasure trove of the finest in Irish arts and crafts in the early 20th century, has been lovingly restored.

We, the people of Oughterard, have our own treasure in our equally exquisite Harry Clarke window behind the altar. TAKE A LOOK.