The 'Little Points' of Rusheeny 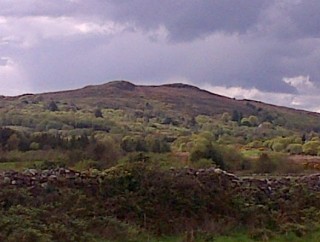 The 'little points' in Rusheeny 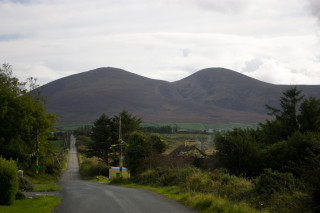 The Paps of Anu

When looking at the hills which slope gracefully down to the western shores of Lough Corrib it is interesting to note that each was an important location in prehistoric times. This is because each hill has, at its summit, a monument either in the form of a cairn or in one instance a ritual site. They are found dotting the hills from Newtown near Moycullen through Knockranny, Doon, Buffy, Knocknalee, Knockacarna, Corkernarusheeny, and even as far as Derroura; however, it is the twin peaks of Corkernarusheeny that are of special interest.

Atop the two summits of this hill near Rusheeny village (although officially in Clooshgereen townland) stands two monuments: a cairn (as of yet unclassified) and a ritual site with a holy/saint’s stone which suggests that the site was of great importance in prehistoric Ireland. The name Corkernarusheeny actually denotes the gap between the two peaks rather than the peaks themselves as it translates to “the narrow pass of the little points” from the Irish: Carcragh na Ruisíní. Although small, these types of hills with two peaks each crowned with cairns/monuments are a common theme in ancient civilisations. This is to do with their anthropomorphic geographic features. These features were found in different places around the world and in some cultures they were revered as the attributes of the Mother Goddess.

Another Irish example of this are the c. 2,270ft high Paps of Anu/Danu (or in Irish: Dá Chích Anann/Danann which translates to “the breasts of Anu/Danu”). These are a pair of rounded hills near Killarney in County Kerry which are named after the goddess Anu (also known as Danu) who was believed to have been an ancient mother goddess of Ireland and the ancestor of the Tuatha De Danann (People of Danu).

On top of each hill is a prehistoric cairn, which may be miniature passage graves or house burial cists. They have been described by many as “stone nipples on the great breasts of the mother goddess”. Archaeologist Frank Coyne suggested that the hills were seen as sacred by the people of ancient Ireland and said “there is little doubt that the mountaintops of both The Paps were utilized for ritual in prehistory”.

Although not as visually impressive as the paps, the little points of Rusheeny were no doubt important to the ancients, as they reinforced the idea that the Earth was a mother who nurtured and provided tying into their entire nature worshipping belief system.