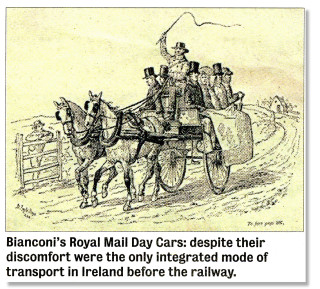 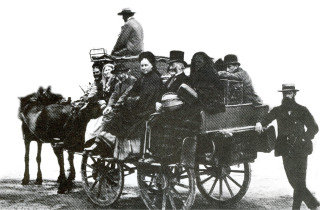 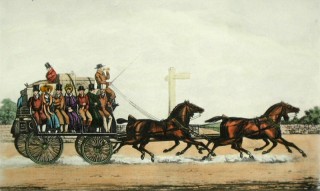 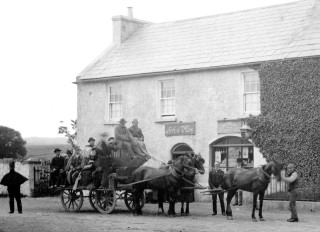 In the picture the mail car stands ready to leave from the Imperial Hotel, Galway bound for Oughterard/ Clifden.

This is one of the famous Bianconi cars named after Carlo Bianconi, an Italian vendor of cheap prints in the streets of Dublin, who founded and developed a most efficient road transport system covering over 3,000 miles of road daily. He operated all over Ireland, carrying everybody and everything thing. Despite their discomfort Bianconi’s Royal Mail Day Coaches were the only mode of transport in Ireland before the railway

Bianconi still in his teens arrived in Ireland in 1802. He was Carlo (Charles) Bianconi an exceptionally talented entrepreneur. He noticed immediately that unlike most countries in Europe, Ireland had no integrated transport system. If you wanted to travel from Galway to Dublin, you either went on foot, rode or: if you could afford it, go by personal carriage. The final part of your journey, which took about three days, was probably by barge. Bianconi set up a national horse drawn carriage service, with a workable timetable, offering connections from various termini, which, relative to the times, offered travelers some confidence that they’d arrive at their destination at a given time. He called his enterprise: Bianconi’s Royal Mail Day Cars. The roads were bad, the coaches were open to the elements, but it was a highly successful transport system.

His Galway – Clifden service began in 1837, one car each way, everyday, and ran until the railway opened in 1895 – long after Bianconi himself had sold out and died. When this photograph was taken in the 1880’s, the fare for the fortynine miles was 7/6d plus “whip” money to the driver. It started from Galway at 9am and reached Clifden at 7pm. In weather, such as we have been having recently, it can hardly have been the most comfortable journey.

On Tuesday August 18th 1835, Friedrich von Raumer, a young Prussian historian, “ mounted the upper deck of an open Bainconi coach, and we get some idea what travel in pre Famine times were like. Raumer had come to Ireland to see for himself how conditions were for the people. Although a Protestant he was critical of England’s tardiness in granting Catholic Emancipation, a hot topic at the time, which had been skillfully championed by the great Daniel O Connell whom Raumer admired.

Sitting on his right was an old woman, opposite her two granddaughters, and beside these a second woman and her son. On his left an elderly man climbed up and sat beside him. The poor man appeared as if ‘he had dropped from the gallows.’ Clearly his clothes were in such a sad state that Raumer feared the man was ‘an expert in insects.’ He moved closer to the grandmother and off they went.

Raumer wrote, “The sky became overcast. It began to rain more and more heavily. Raumer had the only umbrella among his fellow travelers, which he raised. The two young girls crouched down at our feet, and the other four moved their faces so close to the shaft of the umbrella that their noses were almost touching. The old woman rested her head on my right shoulder while the gentleman rested his on my left shoulder. Through this ordeal by water we had, within a very short time, become friends and acquaintances, and I reaped much praise for my considerateness and humanity…”

In 1858 Julius Rodenberg, a German Jewish poet and author, mounted one of these ‘royal’ coaches in Galway. Wrapped in a large tartan cloak, he was heading for Oughterard/Clifden. It was a cold, wet autumn day, and the kind of day ‘which one would have preferred to spend cosily in the quiet of one’s house by the fire.’

The coach was full. Between the heaped up luggage sat a man on a trunk in a long coat. Another man,’a scoundrel’, sat opposite him on a travel bag. Three men sat beside Rodenberg: “one old and two young, all horse traders on their way to the horse fair. On another bench a further five people sat, wrapped in oilcloth and overcoats. Yet another man, equally wrapped against the weather, joined them along the way.

All Wrapped up against the Elements

As they set off the horse traders immediately befriended Julius, who was feeling miserable and sad. They took pity on him and did their best to make him comfortable, giving most of a leather blanket cover to him. They were evidently quite used to the rain, which ‘since leaving Galway had not ceased. ‘Passengers in front ate food and threw leftovers and apple skins into the air to fall on the passengers behind.

“At every hill we reached – and there are enough of them in the west of Ireland – a part of the company had to dismount to make the carriage lighter.”

Julius questioned why they were called ‘royal’ coaches, as they compared to nothing like the comfort of travelling in Europe. ‘It is a sad trick of fate that the royalty of Ireland had long been buried, its nobility now stands begging on the roadside, and these miserable hostelries and carriages are the last thing that can be called ‘royal’.

Poor Julius was not a happy camper.

He traveled on the ‘Royal Mail’ from Tuam to Galway still looking for a wealthy wife. Puckler was not dressed sufficiently against the cold. He offered the driver a tip if he could borrow his coat. ‘At a closer look, however, this appeared so dreadfully dirty and nauseous that I hesitated to make use of it. A young traveling companion immediately removed his ‘splendid, wide traveling cloak and almost forced me to put it on, while assuring me with great eagerness that he never caught cold, and could sleep through the night in water if need be, and that in any case he had only put on his cloak because he did not know where to leave it.”

Our driver blew his horn, as in Germany a signal from the mail-coach to get out of its way. However, the sound was so distorted and pathetic that everyone burst into laughter. A pretty 12 year old lad, who looked like joy personified, though almost naked, let out a mischievous cheer, and called after the driver in his impotent rage: “ Hey you! Your trumpet must have a dose of the sniffles, it’s as hoarse as me auld grandmother. Give it a drop of the craythur or it’ll die of consumption before ye reach Galway!’

A crowd of men were working on the road. They had heard the feeble sound from the horn, and all laughed and cheered as the coach went by. ‘There you are, that’s our people for you,’ said my companion.” Starvation and laughter – that is their lot. Do you suppose that even with the amount of workers and the lack of jobs that any of these earn enough to eat his fill? And yet each of them will put aside something to give to his priest, and when anyone enters his cabin, he will share his last potato with them and crack a joke besides.”

Bianconi’s opened a series of Inns along his busiest routes. One of the Inns was at John Roes, Main St, Oughterard now Kenny’s Bar.

Roe’s was also the agent for steam ship tickets to America.  The two storey house just over the bridge at Oughterard on the Clifden Road had stables at the rear of the house where fresh horses were changed along the Oughterard/Clifden route.

Notes: Some of these observations were taken from an article written by Ronnie O’Gorman in the Galway Advertiser. He researched the following books: Poor Green Ireland – German travel writers Narratives on Ireland from before the 1798 Rising to after the Great Famine, translated and annotated by Eoin Bourke, emeritus professor of German at NUIG, recently published by Peter Lang AG, Switzerland.