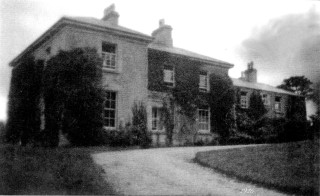 This was the caption on a small news article in the Connacht Tribune dated February 14 th , 1924.  It stated that “Colonel Doig and a number of others keenly interested in the fishing of Oughterard and determined to make a popular holiday resort are at present busily engaged in the preliminaries for the establishment of a golf course near Ross station on the Galway side. An excellent site is available for an 18-hole course and it is expected that nine holes will be available for play this season. The railway line runs beside the links, and when the project develops it will be possible to establish a siding there. Many Galway golfers have already offered to become members of the new Oughterard links.”

The article does not name the exact location on which the course was to be built. The “Galway side” appears to be a misprint as a nine hole course was shortly afterwards developed on the Jackson estate in Killaguile. The same paper of April 19th mentions the “projected new Golf Course at Killeguile, Oughterard.”

According to the Connacht Tribune of July 12th, 1924 the new nine-hole Golf Club was formally opened by Mrs Jackson and the paper gives an account of the proceedings. The Club house was a single storey galvanise building erected on a piece of ground measuring 1 rood and 20 perches which was leased from the Jackson family. The rateable valuation on the land and building was £1.0.0. The Hon. Secretary of the Club was Mr. J.P. Monaghan, Oughterard. Fees: Golf: £0.1s.0 for non-Members and the same for the Tennis Court. The Club house was situated approximately 200 yards from the Galway to Clifden railway line and in close proximity to the Railway cottage which was occupied by Mr. Michael Joyce and family.  The Golf course had a short life in Killaguile, as in December, 1927 the Hon. Secretary – Mr. J.P. Monaghan died and the land was sold in 1934. The Club house still stands and is used as a farm store.

In the report of the opening, the following appears: Pictures in connection with the opening of the new links will be found on page 5.” No photographs of the event were published in that edition and none can be found in the later July editions. Due to a fire in the offices of the Connacht Tribune, photographs prior to 1965 are no longer available. Hopefully, some family members of those involved may have them?