You are here: Home>Topics>Folklore>The Serpent in the Churchyard

The Serpent in the Churchyard 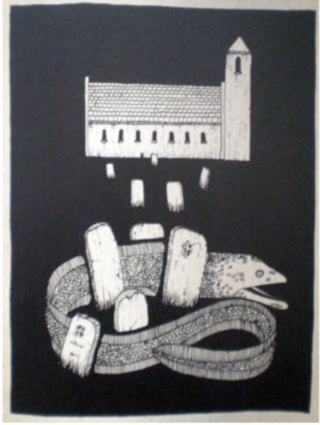 Exploring some local folklore around Lough Corrib and a corpse-eating eel.

Here is an interesting tale, recorded at least as early as 1881 by folklorist G.H.Kinahan. We have a few versions in the 1937 Folklore Collection (available at duchas.ie) from school children in Oughterard of a serpent who comes up from Lough Corrib to devour the corpses of the freshly buried or awaiting burial in the yard of St. Cummins Church, near Oughterard. The creature is variously described as a water-horse or aughisky (from the Irish Each-Uisce), eel, or serpent.

Kinahan tells of a waterhorse with a serpent’s body and a horse’s head. This used to feed on the bodies buried in a churchyard south-east of Oughterard. The tale as he heard it involved the brother of a girl of the Lee family. When his sister passed away, the man stood watch over her body and killed the monster, “its blood staining the church wall to this day.” The holes this aughisky used to come up from the Corrib “can be seen along its track through Lemonfield Bog”.

The versions of the tale in the Schools Folklore Collection are accessible at https://www.duchas.ie/, which is a treasure-trove containing tales collected by school children in the 1930s from their families about their own local places.

These come from pupils at Oughterard National School. The first of the children’s tales in the Schools Collection was collected by one Biddy O Callaghan, who writes that a serpent used to eat the bodies in the graveyard at St Cummins but it was killed by a man from Glann. The man’s mother had died, and he and his brother drew lots to mind the mother’s body so it would not be eaten. The lot fell to the youngest. He went that night to the church to wait and when the serpent came, the man cut it in two. The serpent asked to be struck again but the man did not and instead left the church. As he was going home, a woman in white jumped up behind him on his horse and rode behind him until he got home when she disappeared. The man himself died that night. The place where the woman got on the horse, we are told, is called the Pucin’s Bridge.

Nora Joyce’s version is similar but, in hers, the lot fell to a different son. The son who drew the lot was a married man. The youngest brother, being a single man, said he would go in his place. He stood watch and eventually heard the whistling of the serpent coming up from the Corrib and, just as it was about to begin to eat the body,
the man struck it with his sword and cut it nearly in two. The serpent said, “hit me again” and the man refused, knowing “that if he hit him again he would get alive again and by leaving him that way it would die.”

The young man got on his horse and went home by way of a shortcut to Glann. When he was by the bridge, a little white woman got on the horse behind him and stayed there until he got home. This is how the bridge got its name: Puca’s Bridge. The man and his horse were both dead by morning.

Nora goes on to say that the blood of the serpent was still to be seen on one of the windows of St. Cummin’s Church until about three years ago but, “The stone is not there now and it is said that is must have been taken to Dublin.” (A full transcription of this can be found at https://www.oughterardheritage.org/content/topics/schools-folklore-collection-1937/the-serpent-in-the-churchyard)

The story was still being told nearly a century after the first version we mentioned above. The story as collected by local schoolteacher, Mary Kyne, in the 1970s puts the events in 1812. Mrs. Kyne says that she would have spoken to a number of people regarding this story but the version she recorded was from the late priest Paidir McCullough. Here there is a reoccurrence of the serpent’s track being visible in Lemonfield bog. The name on our deceased in this tale is Mrs. McDonagh.

She had three sons, two married and one single. The single man, Reamonn, declared that the serpent would not eat his mother’s body, and sword in hand, went to the graveyard. While waiting and praying in the church, he has a vision: An angel appeared to him and ordered him to behead the serpent in one blow and not to draw
his sword twice. The angel issues a warning that should even a drop of the serpent’s blood fall on him, he must cut off the place where the blood touches.

Reamonn shortly after this heard a noise and the serpent’s head came through the church window. He beheaded the serpent with a single blow. Unfortunately for our hero, blood spurting from the serpent caused a drop to land on his finger. Mindful of the angel’s warning, he cut off the finger. The serpent then spoke to him, begging to be struck a second time, as it is in great pain. Again remembering what the angel had said, Reamonn kept his sword sheathed. On his ride home, he is met by a strange woman who followed him until he reached a stream and crossed the bridge.

She is unable to cross the stream: the bridge was then on known as Pucky Bridge, or The Fairy Bridge. Reamonn would die a few days later, the story continues, and on his tombstone in the graveyard one can see a picture of a sword. Men working in the bog in Lemonfield would later find the serpent’s tunnel; it was as wide as a bucket.

(You can read this version and other local tales here:
https://www.oughterardheritage.org/content/topics/folklore/local-history-and-folklore)

This is very similar to a version by Julia Clancy in the Schools Collection, although Julia gives no names and the man loses not a finger but his thumb. And, although he does not die straightaway, he is killed a few years later at the same spot on the bridge where he encounters the fairy woman, here called a witch.

A similar story can be found in Caitriona Hastings’ book, City of Streams: Galway Folklore and Folklife in the 1930s, but the action takes place in Cong. The theme of a water serpent devouring the corpses in a churchyard is echoed in the “Sea Stories” section of Lady Gregory’s Visions and Beliefs in Western Ireland. A lobster seller relates, briefly, that a “sort of big eel” used to come and root up the bodies in Tully Churchyard in Renvyle. By the time he told the story to Lady Gregory, however, he hadn’t heard about it in some time and thought it may have been “done away with”.

A water serpent rooting up bodies appeared in Kylemore. The Schools’ Collection has a story from a pupil in Clifden who wrote that the graveyard in question was by a stream and a great eel would come through the gate in the dead of night. One day, a woman died, and her son decided to stand guard over her grave. At midnight, the serpent came through the gate and the boy struck off its head. The eel caught the gate post in its teeth and the marks are still to be seen on the pillar.

The Church of Kilmacreehy near the Cliffs of Moher, legend has it, also had an eel who enjoyed feasting on the flesh of the newly deceased but it is said that Saint Macreehy himself killed the eel to put an end to its midnight snacks.