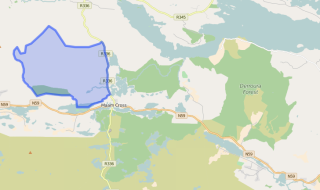 Translation: old land of the flesh

Shannaunnafeola is in the Electoral Division of Letterfore, in Civil Parish of Kilcummin, in the Barony of Moycullen, in the County of Galway

Land very mountainous has a ruin of an old house in it. Contains 2,833¼ acres about 40 a. of which are arable, the remainder is mountain pasture and contains also 55¼ acres of water.

Information on the owner’s family from the Landed Estates Database.

Arthur French St. George is a member of the French (Tyrone) family.

The St.George estate was centred on the house at Tyrone, parish of Drumacoo, barony of Dunkellin, built about 1779. This had originally been a French estate but the family assumed the title of St.George in 1774 due to inheritence from the St.George family of Hatley Manor, county Leitrim. In the 1830s A.F. St. George owned Tyrone House and Kilcolgan Castle, his agent was J. O’Hara. Wm. Griffith of Dublin also acted as an agent for the St. George estate. Arthur French St. George is described as a resident proprietor in 1824. In the early 19th century the St. Georges also owned large amounts of land in the baronies of Moycullen, Ballynahinch and Clare, which they advertised for sale in the early 1850s. Land in the barony of Clare had been acquired through Arthur French’s marriage with a Kirwan in the late 17th century. A portion of the St. George estate, situated in the barony of Longford, was offered for sale in the Encumbered Estates court in November 1853. In 1870s the family owned 15,777 acres in county Galway. By the early 1900s, however, some of the estate had been sold and the house at Tyrone had been left empty for long periods. In 1914 over 3000 acres of an estate descibed as St. George and Concannon was vested in the Congested Districts Board. Many members of the family are buried in a church-style mausoleoum in the cemetery at Drumacoo

Immediate Lessor: “in fee”, meaning that the occupier is also the legal owner of the property.

This is a return of the members of the family, visitors, boarders or servants who slept or abode in their house on the night of Sunday March 31st 1901 in Shannaunnafeóla.

There were 2 houses listed in the Townland of Shannaunnafeóla. The people were all Roman Catholics and they were born in Co. Galway. 19 people lived in Shannaunnafeóla (10 males and 9 females) in the townland. There were 4 farm buildings and out offices which included stables & cow houses.

They lived on a 3rd house with 2 rooms and 2 front windows. They had a stable & a cow house. This was a private dwelling.

They lived on a 3rd house with 2 rooms and 2 front windows. They had a stable & a cow house. This was a private dwelling.

This is a return of the Members of the families in Shannaunnafeóla, their visitors, boarders and servants who slept or abode in the house on the night of Sunday 2nd April 1911.

People that lived in Shannaunnafeóla were born included Co. Galway. There were a total of 4 farm buildings and out offices which included stable, cow house, calf house & piggery.

They lived on a 3rd house with 2 rooms and 2 front windows. They had a stable, cow house, calf house & piggery. This was a private dwelling.

Shannaunnafeóla is in the civil parish of Kilcummin.