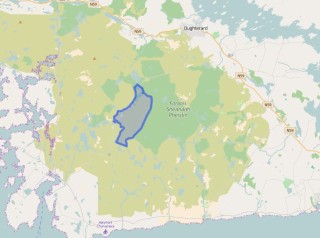 Translation: old land of the little worm or serpent

Shannapheasteen contains 3,083¼ acres of land about 8 acres of which are tillage and pasture, and 21 ¾ acres of water, the remainder is mountain bog and several patches of marsh. The land is mountainous.

Thomas B. Martin  of Ballynahinch Castle.

Martin (Ross) – The Martin family were established beside Ross Lake in the barony of Moycullen, county Galway, from the late 16th century, where they purchased land from the O’Flahertys. They were Royalist supporters and were dispossessed of their property in the city of Galway by the Cromwellians. Robert Martin received a grant of 2,909 acres in the barony of Moycullen, by patent dated 21 Aug 1677. Jasper Martin of Ross, who died in 1700, had two sons Jasper and Richard, from whom descend the two branches of the family settled at Ross and Ballynahinch. Nicholas Martin, who died in 1811, married Elizabeth O’Hara, daughter of Robert O’Hara of Lenaboy, and according to Burke’s ”Landed Gentry”, a grandniece of James O’Hara, 2nd Baron Tyrawley. Their grandson, James Martin of Ross, had sixteen children from his two marriages. His daughter, Maud, married H. Callwell and they were the parents of the author, J. M. Callwell. The youngest daughter of James Martin was Violet Florence Martin of the well-known literary team Somerville and Ross. The Martins of Ross owned 5,767 acres in county Galway in the 1870s. They advertised the sale of their estate in the Landed Estates’ Court in May 1885.

Martin (Ballynahinch) – A branch of the Anglo Norman family of Martin, one of the Tribes of Galway, was granted the O’Flaherty lands in the Connemara region in the mid 17th century. This family were a junior branch of the Martins of Ross and under the Acts of Settlement were granted vast estates in counties Galway, Mayo, Roscommon, Clare and Sligo. By a patent dated 1698 they were confirmed in the possession of their Connemara estate known as the Manor of Claremount by King William. The Westport Estate Papers document the sale of over 27,000 acres in the baronies of Moycullen and Ballynahinch by the trustees for the sale of Colonel John Browne’s estate to John Edwards for Richard Martin in 1699. The early generations of Martins lived at Birch Hall and Dangan, in the townland of Oranhill, parish of Rahoon, near Galway city. Richard Martin, better known as ‘Humanity Dick’, was the first member of the family to be reared as a Protestant. He was a famous duellist and founded the Society for the Prevention of Cruelty to Animals. Ballynahinch Castle was built in the centre of his estate. His son Thomas Martin died in 1847 during the Famine and Thomas’s only daughter and heir, Mary Laetita, inherited a heavily encumbered estate. She married her cousin, Arthur Gonne Bell, and died in New York in 1850. The Martin estates were offered for sale in two sections in 1849. Their property close to Galway town included Dangan, Corcullen, Bushypark and Killeen. Their Connemara estate was acquired by the Law Life Assurance Society in 1852, to whom it was heavily mortgaged. In 1853 the estate of almost 200,000 acres was surveyed by Thomas Colville Scott for a prospective buyer. Richard Martin, second son of Richard ‘Humanity Dick’ Martin of Ballynahinch, is recorded as holding five townlands in the parish of Killannin, barony of Moycullen, county Galway, at the time of Griffith’s Valuation although he emigrated to Canada in 1833. He was also recorded as the occupier of Clareville, a Martin home in the village of Oughterard. Many of his descendants still reside in Canada.

Information on the owner’s family from the Landed Estates Database; this information will display in a new window:

A town land is one of the smallest land divisions in Ireland. They range in size from a few acres to thousands of acres. Many are Gaelic in origin, but some came into existence after the Norman invasion 1169. Shannapheasteen is a townland.

1841 1 house with 8 people living in Shannapheasteen.

1851 Nobody living in the townland and no houses.

Shannapheasteen is in the civil parish of Kilcummin.