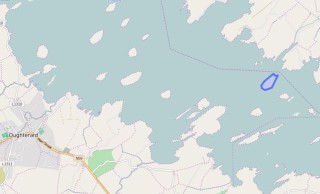 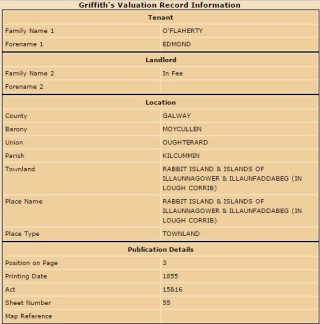 Parish:  Kilcummin
View all place names in this civil parish.

Rabbit Island contains 18½ acres all under tillage and pasture with a few scattered bushes. It is also inhabited. Situated N. of Devenish Island.

In Lough Corrib. It belongs to the townland of Birchhall.

No information listed for Rabbit Island.

There was no listing for Rabbit Island.

Immediate Lessor – “in fee”, meaning that the occupier is also the legal owner of the property;

The out office was a farm building, a cow house, piggery or barn. The land was very poor and sterile and people were always poverty-stricken. At this time most tenants were trying to eke out a living on 5 acres or less and a farmer needed at least 15.3 acres to survive

A town land is one of the smallest land divisions in Ireland. They range in size from a few acres to thousands of acres. Many are Gaelic in origin, but some came into existence after the Norman invasion 1169. Rabbit island is a townland.

Rabbit island is in the civil parish of Kilcummin.