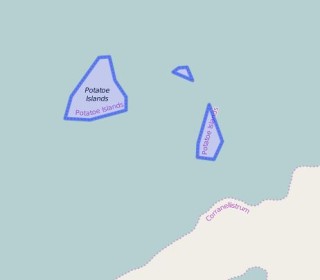 Potatoe Islands is in the Electoral Division of Wormhole, in Civil Parish of Kilcummin, in the Barony of Moycullen, in the County of Galway

Parish:   Kilcummin
View all place names in this civil parish.

In Lough Corrib. It belongs to the townland of Curranellistruin (Corranellistrum).

Some other placenames in or near this townland are

No information given for Potatoe Island.

Occupier: Tenants of the townland of Corranellistrum.

A townland is one of the smallest land divisions in Ireland. They range in size from a few acres to thousands of acres. Many are Gaelic in origin, but some came into existence after the Norman invasion of 1169. Potatoe Island is a townland.

No people lived on Potatoe Island

Potatoe Island is in the civil parish of Kilcummin.

Google Maps
(this site will display in a new window)