You are here: Home>Places>Townlands of The Oughterard Poor Law Union>Knockbaun>Knockbaun 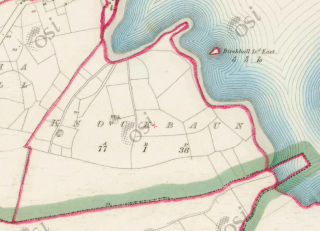 Knockbaun is in the Electoral Division of Oughterard, in Civil Parish of Kilcummin, in the Barony of Moycullen, in the County of Galway

Knockbaun contains 77½ acres about 70 acres are under tillage and pasture, the remainder is bog. There is a group of houses situate close to its northern boundary.

Situated in the northern extremity of the parish.

Knockbaun borders the following other townlands:

Martin (Ross) – The Martin family was established beside Ross Lake in the barony of Moycullen, county Galway, from the late 16th century, where they purchased land from the O’Flahertys. They were Royalist supporters and were dispossessed of their property in the city of Galway by the Cromwellians. Robert Martin received a grant of 2,909 acres in the barony of Moycullen, by patent dated 21 Aug 1677. Jasper Martin of Ross, who died in 1700, had two sons Jasper and Richard, from whom descend the two branches of the family settled at Ross and Ballynahinch. Nicholas Martin, who died in 1811, married Elizabeth O’Hara, daughter of Robert O’Hara of Lenaboy, and according to Burke’s ”Landed Gentry”, a grandniece of James O’Hara, 2nd Baron Tyrawley. Their grandson, James Martin of Ross, had sixteen children from his two marriages. His daughter, Maud, married H. Callwell and they were the parents of the author, J. M. Callwell. The youngest daughter of James Martin was Violet Florence Martin of the well-known literary team Somerville and Ross. The Martins of Ross owned 5,767 acres in county Galway in the 1870s. They advertised the sale of their estate in the Landed Estates’ Court in May 1885.

Townland of KNOCKBAUN (Moycullen By)

Tithes were a tax on agricultural produce which was payable by the occupiers of agricultural land. They were the main source of income for the parish clergy of the Church of Ireland (the largest Protestant church and the church established by law). However, in many parishes a large part of the tithes were ‘appropriate’, which meant that they were payable to a bishop, cathedral chapter or other ecclesiastical recipient, or were ‘impropriate’, which generally meant that they were payable to a local landowner. The parishes used in the Tithe Applotment Books are civil or Church of Ireland parishes, which often differ in name and territory from Catholic parishes,

Acts of Parliament of 1823 and 1832 provided for the conversion of tithes into a fixed charge on land, and specified the average price of wheat or oats in the parish in the seven years before 1821 as the basis on which the tithes would be calculated. They also extended the application of tithes to pasture, where previously they had been levied only on tillage.

View the heads of households in the townland at this time

A townland is one of the smallest land divisions in Ireland. They range in size from a few acres to thousands of acres. Many are Gaelic in origin, but some came into existence after the Norman invasion of 1169. Knockbaun is a townland.

This is a return of the member of the family, their Visitors, Boarders, and Servants who slept or abode in their house on the night of 31st of March 1901 in Knockbaun. There was 1 house listed in the townland of Knockbaun. 7 (3 females/ 4 males) were all Roman Catholics. The people that lived in Knockbaun were born in Co. Galway & Boston America. There were a total of 3 farm buildings and out offices; which included cow house, stable, & a piggery.

Murty was a farmer, Pat & Mark were farmer’s sons; Nora, Mary & Julia were farmer’s daughters, all born in Co. Galway, James was a agricultural labourer; he was born in Boston, America.

The entire household could read and write and spoke Irish & English. They lived in a 3rd class house with 2 rooms and 2 front windows. They had a stable, cow house & a piggery. This was a private dwelling.

This is a return of the Members of the families in Knockbaun, their visitors, boarders and servants who slept or abode in the house on the night of Sunday 2nd April 1911.

There was 1 house listed in the townland of Knockbaun. Of the people living in Knockbaun all 6 (3 males/3 females) were Roman Catholics & born in Co. Galway.

There were a total of 3 farm buildings and out offices; which included cow house, stable, & a piggery.

Marty was a farmer, Patrick & Mark were farmer’s sons; all born in Co. Galway.

The entire household could read and write and spoke Irish & English. They lived in a 3rd class house with 2 rooms and 2 front windows. They had a stable, cow house & a piggery. This was a private dwelling.

Knockbaun is in the civil parish of Kilcummin.

You can use this link to view a map of archaelogical features. This link brings you to a website wherein you will have to search for your townland.