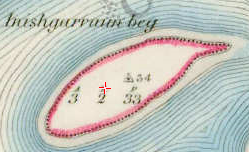 Translation: island of the horse (little)

Inishgarraun Beg is in the Electoral Division of Oughterard, in Civil Parish of Kilcummin, in the Barony of Moycullen, in the County of Galway

Description: Contains 3¾ acres all under tillage.

In Griffith’s valuation the area was 3 acres, 2 rood & 33 perch of land, there was no ratable value list for Inishgurraunbeg on its own.

“in fee”, meaning that the occupier is also the legal owner of the property.

A townland is one of the smallest land divisions in Ireland. They range in size from a few acres to thousands of acres. Many are Gaelic in origin, but some came into existence after the Norman invasion of 1169. Innishgirraunbeg is a townland.

There were no people, houses or buildings listed on the census for Inishgarraun Beg.

There were no people, houses or buildings listed on the census for Inishgarraun Beg.

Innishgirraunbeg is in the civil parish of Kilcummin.

Information from the National Monuments Service

You can use this link to view a map of archaeological features.
This link brings you to a website wherein you will have to search for your townland.