You are here: Home>Places>Townlands of The Oughterard Poor Law Union>Illauncarbry>Illauncarbry 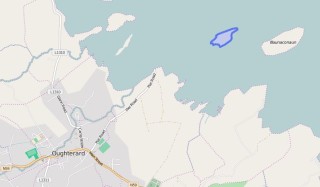 Carbry island contains 4¾ acres all under good pasture with a brushwood. It is situated W. of Ilauncunnaun and S. of Innishanvo.

In Lough Corrib, it belongs to the townland of Lemonfield.

No information given for Illauncarbry.

No information given for Illauncarbry.

Carbry Island had an area of 4 acres, 0 rood & 19 perch. As Rev John Darcy also had occupation of other islands, there is not an actual breakdown of the actual rental valuation for this island.

A townland is one of the smallest land divisions in Ireland. They range in size from a few acres to thousands of acres. Many are Gaelic in origin, but some came into existence after the Norman invasion of 1169. Illauncarbry is a townland.

All available census records show that no people lived on the island from 1841 to 1911.

Illauncarbry is in the civil parish of Kilcummin.