You are here: Home>Places>Townlands of The Oughterard Poor Law Union>Golam>Golam 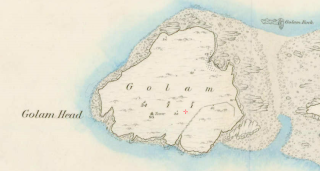 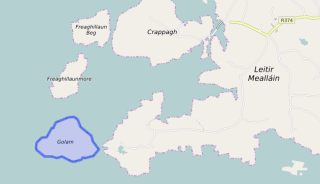 Golam is in the Electoral Division of Gorumna, in Civil Parish of Kilcummin, in the Barony of Moycullen, in the County of Galway

In the sea, it belongs to Lettermullen.

Information from the Ordnance Survey Letters:

The Ordnance Survey Letters are letters between John O’Donovan and his supervisor, Thomas Larcom, regarding the work of compiling the Field Books. These letters provide further discussion on many of the places listed in the Field Books.

References to this place can be found in the following letter.

A townland is one of the smallest land divisions in Ireland. They range in size from a few acres to thousands of acres. Many are Gaelic in origin, but some came into existence after the Norman invasion of 1169. Golamhead is in Lettermullan townland.

1901 – No one lived on the island. http://www.census.nationalarchives.ie/pages/1901/Galway/Gorumna/