You are here: Home>Places>Townlands of The Oughterard Poor Law Union>Glebe>Glebe 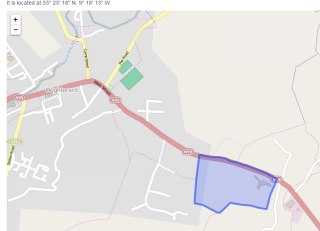 Other Forms of the Name:

Glebe contains 37½ acres all arable with the exception of about 14 acres of bog, the Glebe House situate in the eastern extremity of the townland. There is an old fort and quarry situate close to its northern boundary.

Glebe borders the following other townlands:

Rev. John Wilson 1806-1844 was appointed as Perpetual Curate to the parish of Kilcummin 1806. One acre of land was acquired from Arthur St. George from Tyrone, Galway for the nominal sum of 10 shillings.

Townland of GLEBE (Moycullen By)

No information listed for Glebe

A town land is one of the smallest land divisions in Ireland. They range in size from a few acres to thousands of acres. Many are Gaelic in origin, but some came into existence after the Norman invasion 1169. Glebe is a townland.

This is a return of the member of the family, their Visitors, Boarders, and Servants who slept or abode in their house on the night of 31st of March 1901 in Glebe. There was 1 house listed in the townland of Glebe. 5 (2 females/ 3 males) were all Roman Catholics.

There were a total of 2 farm buildings and out offices which included a piggery & a cow house.

(All documents are damaged, see links below).

Walls of the houses: The walls were of stone, brick, and concrete or of mud, wood or other perishable material. The house in Glebe was built of stone, brick or concrete. There were no mud cabins.

The head of the family was a herd; the son a herd’s son; the daughter a herd’s daughter. None of the family could read. Due to the fact that the return form was torn, there is a ? entered for whether they spoke Irish or English or both.

They lived in a 3rd class house with 2 rooms and 1 front window. They had a piggery and a cow house. This premise was a Private Dwelling.

This is a return of the Members of the families in Glebe, their visitors, boarders and servants who slept or abode in the house on the night of Sunday 2nd April 1911.

There were 2 houses listed in the Townland of Glebe. Of the people living in Glebe all 4(1 male/3 females) 1 was Roman Catholic & 3 Protestant Episcopalian.

People that lived in Glebe were born included Dublin City, Co. Waterford, Co. Galway & England. There were a total of 4 farm buildings and out offices which included a stable, coach house, barn and a shed.

They lived in a 1st class house with 4 rooms and 8 front windows. They had a stable, coach house, a barn and a shed. This premise was a Private Dwelling.

Joseph and Edith were married for 17 years; they had 2 children; both living at the time of the census.

2 entries were crossed out on the return. Francis ? White, son aged 16 & Rachel Margaret White, daughter aged 14. They were scholars and both were born in Cork.

Elizabeth Gallagher aged 70 was head of the family; she was married and lived alone. She was a dressmaker; could read and write. She was married for 22 years and did not have children. She was Protestant Episcopalian.

Elizabeth lived in a 2nd class house with 2 rooms and 2 front windows. She had no out buildings. This premise was a Private Dwelling.

As per Enumerator’s abstract (Form N)

There were 2 houses in the townland of Glebe with a total of 4 people living in the townland; 3 females and one male; One Roman Catholic and Three Protestant Episcopalian.

Glebe is in the civil parish of Kilcummin.

Glebe
You can use this link to find this townland on Google Maps.

View Logainm information;
this information will display in a new window: