You are here: Home>Places>Townlands of The Civil Parish of Kilcummin>Drimneen>Drimneen 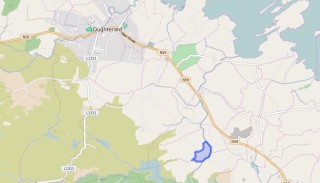 Other Forms of the Name with the authority  source (if provided) in italics.

Drimneen is situated in the eastern part of the parish. It is bounded on the West and North West by Raha, on the South by Carhoondolla and on the East by Killannin Parish.

Martin (Ross) – The Martin family was established beside Ross Lake in the barony of Moycullen, county Galway, from the late 16th century, where they purchased land from the O’Flahertys. They were Royalist supporters and were dispossessed of their property in the city of Galway by the Cromwellians. Robert Martin received a grant of 2,909 acres in the barony of Moycullen, by patent dated 21 Aug 1677. Jasper Martin of Ross, who died in 1700, had two sons Jasper and Richard, from whom descend the two branches of the family settled at Ross and Ballynahinch. Nicholas Martin, who died in 1811, married Elizabeth O’Hara, daughter of Robert O’Hara of Lenaboy, and according to Burke’s ”Landed Gentry”, a grandniece of James O’Hara, 2nd Baron Tyrawley. Their grandson, James Martin of Ross, had sixteen children from his two marriages. His daughter, Maud, married H. Callwell and they were the parents of the author, J. M. Callwell. The youngest daughter of James Martin was Violet Florence Martin of the well known literary team Somerville and Ross. The Martins of Ross owned 5,767 acres in county Galway in the 1870s. They advertised the sale of their estate in the Landed Estates’ Court in May 1885.

Information on the owner’s family from the Landed Estates Database; this information will display in a new window:

View the heads of households in the townland at this time;

A town land is one of the smallest land divisions in Ireland. They range in size from a few acres to thousands of acres. Many are Gaelic in origin, but some came into existence after the Norman invasion 1169. Drimneen is a townland.

1891 – No houses with no people living in the townland. There were no Outbuildings. Total Valuation of Houses & Lands £13 0s 0d.

An application was made by McDonagh from Drimneen in the Parish of Kilcummin in the Barony of Moycullen. Reference # Cen/S/2006. The surname Wind also appears on the application. No Record was found for 1851.

Full Names of Father and Mother of the applicant: Stephen & Maggie (Wind) McDonagh

Return searched by FW 4/3/25 not found. Sheet 68 missing from Lettermullen. Information crossed out on the application (see attached link below)

Drimneen is in the civil parish of Kilcummin.