You are here: Home>Places>Townlands of The Oughterard Poor Law Union>Derrylaura>Derrylaura 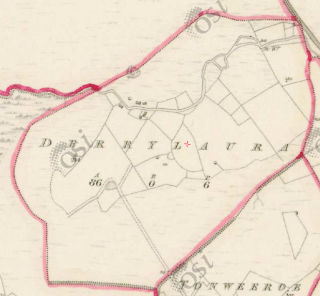 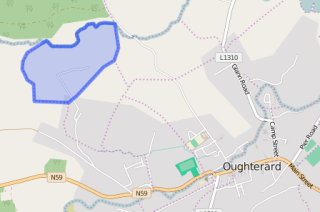 Translation: oak wood of the mare

Derrylaura is in the Electoral Division of Oughterard, in Civil Parish of Kilcummin, in the Barony of Moycullen, in the County of Galway

Derrylaura contains 86 acres about the ½ of which is arable, the remainder is bog. There is a large Gravel Pit near its centre.

In the North Eastern part of the parish. Bounded on the North by New Village, on the W. and South by Claremount, and on the East by Thoanwee and Thoanweeroe.

Derrylaura borders the following other townlands:

Derrylaura in Galway; of the lair or mare. Derrylavan in Monaghan; Doire-leamháin, of the elm.

A townland is one of the smallest land divisions in Ireland. They range in size from a few acres to thousands of acres. Many are Gaelic in origin, but some came into existence after the Norman invasion of 1169. Derrylaura is a townland.

This is a return of the members of the family, visitors, boarders or servants who slept or abode in their house on the night of Sunday March 31st 1901 in Derrylaura.

There were 2 houses listed in the Townland of Derrylaura. The people were all Roman Catholics and they were born in Co. Galway. 9 people lived in Derrylaura (4 males and 5 females) in the townland. There were 2 farm buildings and out offices which included a cow house & piggery.

Peter Malia aged 30 was head of the family; married to Kate aged 25. They lived with his widowed mother Honor aged 80.

They lived in a 2nd class house with 2 rooms and 3 front windows. This was a private dwelling.

They lived in a 3rd class house with 2 rooms and 1 front window. They had a cow house & a piggery. This was a private dwelling.

This is a return of the Members of the families in Derrylaura, their visitors, boarders and servants who slept or abode in the house on the night of Sunday 2nd April 1911.

There were 2 houses listed in the Townland of Derrylaura. Of the people living in Derrylaura all 11 (8 males/3 females) were Roman Catholics.

People that lived in Derrylaura were born included Co. Galway. There were a total of 2 farm buildings; they were cow houses.

John Malia aged 55 was head of the family; married to Mary aged 50. They lived with their children Joseph aged 9, Peter aged 4 & Elizabeth aged 1.

John was a farmer; Peter & Elizabeth were scholars. John & Mary (mother) could not read. Joseph could not read; he was blind. Peter could read & write. Elizabeth could read. The entire family spoke Irish & English.

John & Mary were married for 25 years; they had 7 children with 4 living at the time of the census.

They lived in a 3rd class house with 2 rooms and 2 front windows. They had a cow house. This was a private dwelling.

Peter & Kate were married for 10 years; they had 4 children with 4 living at the time of the census.

They lived in a 3rd class house with 2 rooms and 3 front windows. They had a cow house. This was a private dwelling.

Church records of births, deaths and marriages are available online at http://www.rootsireland.ie.  To search these records, you will need to know the ‘church parish’ rather than the ‘civil parish’. (The civil parish is the pre-reformation parish and was frequently used as a unit of administration in the past.)

Derrylaura is in the civil parish of Kilcummin.