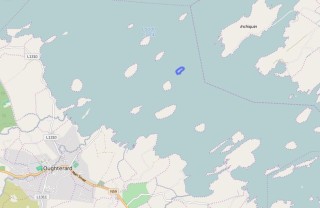 Cussafoor Island contains 1¼ acre, all under rough pasture and brushwood – situated nearly N. of Innishhool and S.E. of Urkannbeg Island.

In Lough Corrib, it belongs to the townland of Portacarron.

No information given for Cussafoor.

·       The extension of the existing Poor Law Commissioners’ powers to Ireland, with the appointment of Assistant Commissioners who were to implement the Act in Ireland.

·       The division of the country into Poor Law Unions based on Irish electoral divisions which were themselves made up from townlands.

·       The creation of a Board of Guardians for each Union, two-thirds of whom were to be elected, the other third to be appointed ex officio.

·       The collection of a local poor-rate to finance the system.

All available census records show that no people lived on the island from 1841 to 1911.

What is a townland?:

Cussafoor Island is in the civil parish of Kilcummin.

Kilcummin in Galway West.
In general, the civil parish and the Church of Ireland parish are the same, but, this is not always the case.