You are here: Home>Places>Townlands of The Civil Parish of Kilcummin>Ardvarna>Ardvarna 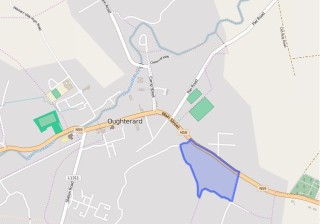 Ardvarna is in the Electoral Division of Oughterard, in Civil Parish of Kilcummin, in the Barony of Moycullen, in the County of Galway

Other Forms of the Name:

Ardvarna is in the Electoral Division of Oughterard, in Civil Parish of Kilcummin, in the Barony of Moycullen, in the County of Galway

Ardvarna has good land. It contains 18¼ acres, all arable with the exception of some ornamental ground, and a few patches of plantation. Ardvarna House is situated near its western boundary. The centre of the Galway and Oughterard road forms the N. Eastern boundary of this townland.

Ardvarna borders the following other townlands:

O’Flahertie (Lemonfield) – The O’Flaherties of Lemonfield are descended from the O’Flaherties of Aughnanure Castle near Oughterard, county Galway. Their estate was in the parish of Kilcummin, barony of Moycullen, county Galway, and Lemonfield, close to the village of Oughterard, was their seat from the mid 18th century. There are some 17th and 19th century records relating to them in the Westport Papers. The O’Flahertie estate of over 4500 acres was advertised for sale in 1854 and a reduced acreage of 2346 acres in 1864. Both rentals included lead mines and a black marble quarry. The Irish Times reports that the 1864 sale saw many of the lots bought by a Mr. Carpenter. In the 1870s the O’Flaherties owned 2340 acres in county Galway. By March 1916 they had accepted offers from the Congested Districts’ Board for parts of their estate.

The family spelt the name O‘fflahertie.

Occupiers of the Land:  John Scully

A town land is one of the smallest land divisions in Ireland. They range in size from a few acres to thousands of acres. Many are Gaelic in origin, but some came into existence after the Norman invasion 1169. Ardvarna is a townland.

This is a return of the member of the family, their Visitors, Boarders, and Servants who slept or abode in their house on the night of 31st of March 1901 in Ardvarna. There was 1 house listed in the townland of Ardvarna. Of the people living in Ardvarna 7 (3 females/3 males) all were Roman Catholics.

The people that lived in Ardvarna were born in Co. Galway & Co. Kerry, Co. Clare.

There were a total of 7 farm buildings and out offices which included stable,coach house, harness room, cow house, fowl house, Barn & Turf house.

Class of House:The class of house depended on the materials used in the roof, walls, number of rooms and number of front windows. A 1st class house was considered the highest standard.

Walls of the houses: The walls were of stone, brick, and concrete or of mud, wood or other perishable material. The house in Ardvarna was built of stone, brick or concrete. There were no mud cabins.

They lived in a 1st class house with 5 rooms and 7 front windows. They also had stable, coach house, harness room, cow house, fowl house, Barn & Turf house. This premise was a Private Dwelling.

This is a return of the Members of the families in Ardvarna, their visitors, boarders and servants who slept or abode in the house on the night of Sunday 2nd April 1911.

There were 2 houses listed in the Townland of Ardvarna. Of the people living in Ardvarna all 4(2 males/2 females) were Protestant Episcopalian.

People that lived in Ardvarna were born included Co.Tipperary. There were a total of 1 farm buildings and out offices which included was a shed.

Thomas Allen aged 50 was head of the family, married to Jane aged 48, they lived with their children Robert aged 28 & Maggie aged 18 both single.

Thomas was a gardener; Robert was a groom. The entire family could read & write; they were born in Co. Tipperary and Protestant Episcopalian.

Thomas & Jane were married for 30 years; they had 6 children with all 6 still living at the time of the census.

They lived in a 2nd class house with 2 rooms and 2 front windows. They had a shed.

Major B. Hallingsheas was the landlord of this property.

Ardvarna is in the civil parish of Kilcummin.