You are here: Home>Places>Archaeology>Mesolithic>Mesolithic Finds in Oughterard 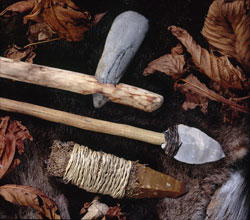 In August 1975 I found a small flint flake which is the subject of this note on the shore of “ River Island” in Lough Corrib.  This island is situated at the mouth of the Owenriff River, near Oughterard, Co. Galway. (O.S. six-inch sheet no. 54; NGR M 129420). The flint flake was found on the stony shore of the north side of the island between the water’s edge and the actual ground of the island: it seems likely that it fell from the soil above the “high water mark”. A careful search produced no further archaeological material.

Condition of the Bann Flake

The flake of patinated honey-coloured flint, is in good condition except for some recent chipping on either side edge: it is pointed and approximately leaf shaped and bears some light secondary working or retouching at the butt (for at least 2cm on one side edge of the butt, for 1.2 cm on the other).

Measurements of the Flake

It measures 61mm in length, 36mm in maximum width and 12mm. in maximum thickness.  Such broad, leaf-shaped flint flakes with a certain amount of lateral trimming at the butt are commonly known as “Bann Flakes” and are a characteristic implement type of the later Irish Mesolithic.

Function of the Bann Flake

It has been suggested that they were mounted in wooden shafts and used as fish spears: it has also been pointed out, however, that the broad butt would make it rather difficult to haft them in this fashion. While some may have served as projectile tips, others may have had a variety of functions as knives, scrapers etc. This Bann Flake, from near Oughterard, suggests the presence of a Mesolithic hunting and fishing group west of Lough Corrib sometime before 3500B.C. and, at the moment, is the earliest evidence of human occupation in County Galway. It has been presented to the Department of Archaeology, University College, Galway.

Other Finds near Oughterard

The object of the note is to record the findings of some ‘stray’ flints in the same area as the previous find by the writer of the Bann Flake of the later Mesolithic date near Oughterard.  The previous find was made in 1975 and this was the subject of a short note in this journal. The find spot was on the shore of “River Island” in Lough Corrib.  This island is situated at  the mouth of the Owenriff river, near Oughterard, Co. Galway. (0.5six inch sheet no.54; NGR M 129420).  The present flints were found at the same place as the Bann Flake found in 1975, literally within feet of where the present flints were found.  The flints were found on the stony shore of the north side of the island: it seems likely that they came from soil of silt, perhaps above the high water mark. A careful search of the area produce no further finds.

Description of the Finds

The present finds are two pieces of honey-coloured flint, both of which are somewhat patinated. The first (A) is some 29mm long and bears some working on each of the two main sides.  The second (B) is some 24mm long and bears working on all edges and on both sides. The flints are not of a particularly diagnostic type.  The chipping along the edges of A and its size suggests that it may have been a scraper of some sort. The other flint, B, has been worked on all surfaces, but does not seem to have served any particular function and may have been just a waste piece of flint. The finds themselves are of little significance as stray finds.

The Importance of the Finds

Their importance lies in the fact that they tend to show that the ‘isolated’ Bann Flake previously discovered in the area was not just a single stray flint completely out of context and well out of the ‘normal’ known distributional area of such finds. Nor was it therefore a chance stray find which came by complete accident and which had not come form the context of a site.  The present finds tend to strongly suggest the presence of a site in the area though we are not any closer now to locating any such find site than when the first and morphologically more significant find was made in 1975.  The finds together are strong evidence for a site somewhere in the vicinity of the find spot, possibly the site of a Mesolithic settlement.

Unfortunately on evidence for the site apart from the flints themselves has been found despite an extensive search of the shoreline and extensive field walking further inland.  It seems likely that the flints being found are being periodically washed out of someplace, possibly an eroded bank of material or are being washed up from some already disturbed deposit. An eroded river bank deposit may be a possible source. It is likely since dredging an removal of sand during river deepening operations seem to have caused much disturbance that the flints might well be some distance from their original source. Such human activity may have destroyed, or at least partly altered any such site or part of a site, from which the flints may have come.

The site may have been situated somewhat upstream of the river mouth in the Owenriff river, rather than in the main lake and flints could be carried along with silt from the Owenriff river itself.  The relatively good, though patinated condition of the flints suggests that they have not been submitted to rolling or weathering over a long period and have therefore come from the Owenriff tributary, rather than from the more turbulent  main lake where they are likely to have been more battered and rolled.

Expansion of Mesolithic Sites in Ireland

Since 1978 the distribution of known Mesolithic sites in Ireland has continued to expand rapidly mainly through the work of Dr. Woodham and others.  The Lough Boora excavation by Mr. Michael Ryan has produced early evidence for an early Mesolithic camp site in the Midlands and Dr Woodham’s excavation at Mount Sandel and many other sites have given us a completely new view of the Mesolithic. The picture that may eventually emerge, as the distribution pattern continues to widen, is one of Mesolithic activity over most of the island. In Co. Galway itself, finds of a very large number of late Mesolithic tools (soon to be published) have been made over the last few years during dredging of the river Corrib. The present finds while meager are enough in themselves, serve to point towards the existence of one (of what may have been many) later Mesolithic sites in Co. Galway.