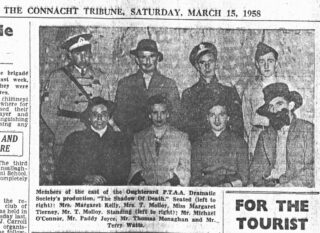 The Oughterard centre of the Pioneer P.T.A.A. was founded on the 17th of March 1944. Twelve members enrolled in 1944 and they were then in a position to qualify for a Centre. An Executive Council was elected from the twelve members. Rev Fr. Thomas Kyne, Administrator became spiritual Director, Mr. James Cleary, Main St. President, Sergeant Patrick Flynn, Garda Barracks, Secretary and Treasurer.

1953 was a very important landmark for the Centre when Rev. Fr James Mc Carron S.J., Central Director, Pioneer Association addressed the A.G.M. of the pioneers which was attended by 170 members including members from Moycullen and Camus Centres. In 1955 special permission was granted for the amalgamation of the parishes of Kilcummin and Killannin into one Pioneer Centre – this at the time was a rather unique happening in the annals of the P.T.A.A. This amalgamation resulted in a huge increase in numbers.

The Pioneer movement in Oughterard provided a varied social programme for its members down the years. Pilgrimages to Knock Shrine, Weekend outings (which originated from one day outings) to various venues around the country were organized annually.

The pioneers organized a Dramatic Society from 1950-1962 which show cased the talent of many people in the area as well as providing excellent entertainment for the community who were regarded as eager theatre goers from 1912 onwards. The Children’s Christmas Party was also organized by the members and they always offered their services to the local Social Service Group when they organized outings and parties for the senior citizens.

In its many years of existence the Pioneer Association has encountered many changes in personnel but all have contributed to its success in the area. Tim Molloy, Main St. was treasurer of the Centre from 1949 until his death 1999.  The members appreciated the tremendous work done by Tim on behalf of the association. He was held in high esteem – he was the ‘pillar’ of the association. Matt Molloy, Eighterard said , Tim was a Pioneer for fifty two years and served on the Centre Council for all that time, apart from the few years he spent in England.  Tim was an active member of the community. He helped out in running quizes, Pioneer and senior citizens parties and Santa Claus for the children at Christmas. Tim was a kind and caring person.  I was privileged to have known him”.