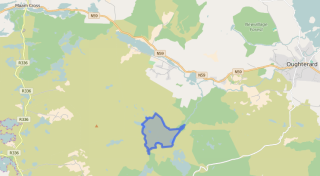 Translation: old land of the hillocks

Seanadh Dolacháin is in the Electoral Division of Oughterard, in Civil Parish of Kilcummin, in the Barony of Moycullen, in the County of Galway

Land mountainous. Contains 522 acres of land all mountain pasture and 33¾ acres of water. There is nothing remarkable in this townland.

Situation: In the eastern extremity of the parish

French (Tyrone) – Jeffrey French was granted various lands in counties Mayo, Galway, Roscommon and Clare by patent dated 10 Aug 1678. His brother Arthur French of Tyrone, county Galway, Mayor of Galway 1691, had 2 sons Christopher from whom descend the French/St George family of Tyrone and Arthur ancestor of the French family of Cloonyquin, parish of Elphin, barony of Roscommon, county Roscommon. Patrick French of Brook Lodge, parish of Killererin, barony of Clare, county Galway, was a younger son of Christopher of Tyrone. Burke writes that Arthur French, Christopher’s heir was involved in a case in the House of Lords 1764-1765 French v Caddell. In 1736 he married Olivia Usher sister of St George Usher St George of Headford, county Galway, created Baron St George of Hatley St George. Their son Christopher assumed the surname St George in 1774 in compliance with his great grandfather’s will.

A townland is one of the smallest land divisions in Ireland. They range in size from a few acres to thousands of acres. Many are Gaelic in origin, but some came into existence after the Norman invasion of 1169. Shannadullaghaun is a townland.

Shannadullaghaun is in the civil parish of Kilcummin.