You are here: Home>Places>Townlands of The Civil Parish of Kilcummin>Oorid>Oorid 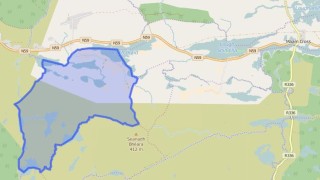 Oorid is in the Electoral Division of Turlough, in Civil Parish of Kilcummin, in the Barony of Moycullen, in the County of Galway

Some other placenames in or near this townland are

Oorid borders the following other townlands:

Thomas B. Martin, Esq., Ballinahinch, Proprietor. Contains 1,325¼ acres of land about 60 acres of which are arable and 188¾ acres of water, the remainder is mountain bog. There is an old Burial Ground near its N. Eastern boundary.

The Directors of the Law Life Assurance Co.

In Fee (“in fee”, meaning that the occupier is also the legal owner of the property)

A town land is one of the smallest land divisions in Ireland. They range in size from a few acres to thousands of acres. Many are Gaelic in origin, but some came into existence after the Norman invasion 1169. Oorid is a townland.

This is a return of the member of the family, their Visitors, Boarders, and Servants who slept or abode in their house on the night of 31st of March 1901 in Oorid. There were 4 houses listed in the townland of Oorid. 4 (1 females/ 3 males) were all Roman Catholics. The people that lived in Oorid were born in Co. Galway.

There were a total of 4 farm buildings and out offices which included 2 cow house, 1 piggery & a calf house.

Walls of the houses: The walls were of stone, brick, and concrete or of mud, wood or other perishable material. The house in Oorid was built of stone, brick or concrete. There were no mud cabins.

Bridget Burke aged 50 was head of the family; a widow she lived with her sons Colman aged 23, John aged 21 and Patrick age 16, all single.

Bridget was a housekeeper, Colman was a herd & John & Patrick were general labourers. The entire household spoke Irish & English, they could not read or write.

They lived in a 3rd class house with 2 rooms and 2 front windows. They had 2 cow houses, a calf house & a piggery. This premise was a Private Dwelling. Richard King was the landlord.

There was no listing for anyone living in Oorid in 1911.

Oorid is in the civil parish of Kilcummin.

Archaeological map from the National Monuments Service
Information from the Logainm database: