You are here: Home>Places>Townlands of The Civil Parish of Kilcummin>Lugganimma>Lugganimma 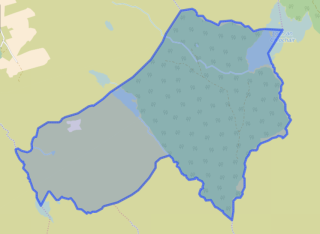 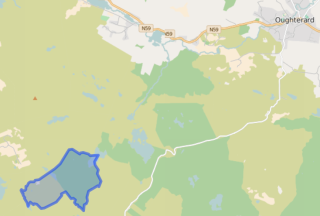 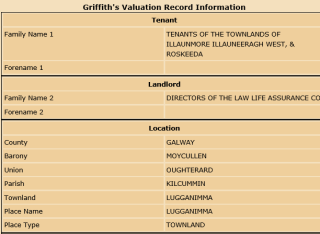 Translation: hollow of the butter

Parish: Kilcummin View all place names in this civil parish.

Lugganimma contains 1,099 acres of land, about 7 acres of which is under tillage and 41 acres of water, the remainder is mountain pasture.

Lugganimma borders the following other townlands:

Translation according to P. W. Joyce

Lugakeeran in Roscommon; Log-a’-chaorthainn, hollow of the quicken-tree plantation. See vol. i. p. 513 [reproduced below]. The quicken-tree. Caerthainn [keeran or caurhan], is the Irish word for the quicken-tree, mountain ash, or rowan-tree. It enters into names very often in the form of Keeran, which is the name of several townlands; but it undergoes many other modifications, such as Keerhan in Louth; Carhan in Kerry, as in case of the river Carhan (quicken-tree river) at Cahersiveen; Kerane and Keraun in Tipperary and King’s County: – all these places must have produced this tree in abundance, for the names mean simply mountain ash. Drumkeeran, the ridge of the quicken-tree, is the name of a village in Leitrim, of a parish in Fermanagh, and of several townlands in the northern counties.

Richd Martin & Patt Walsh rented land in Lugganimma in 1829, it is unclear from the record as to exactly the amount of land, they held in Lugganimma.

Occupiers of the Land:

The occupiers of the land at this time were:

The Immediate Lessor was The Law Life Assurance Co.

The out office was a farm building, a cow house, piggery or barn. The land was very poor and sterile and people were always poverty-stricken. At this time most tenants were trying to eke out a living on 5acres or less and farmers needed at least 15.3 acres to survive.

A townland is one of the smallest land divisions in Ireland. They range in size from a few acres to thousands of acres. Many are Gaelic in origin, but some came into existence after the Norman invasion of 1169. Lugganimma is a townland.

This is a return of the member of the family, their Visitors, Boarders, and Servants who slept or abode in their house on the night of 31st of March 1901.

Hugh Walsh aged 30 was head of the family; married to Mary aged 29.

They lived in a 3rd class house with 2 rooms and 1 front window. They had a cow house. This was a private dwelling.

This is a return of the Members of the families in Lugganimma their visitors, boarders and servants who slept or abode in the house on the night of Sunday 2nd April 1911.

Hugh Walsh aged 45 was head of the family; married to Mary aged 40.

Hugh & Mary were farmers. They could not read & spoke only Irish. They were married for 12 years.

They lived in a 3rd class house with 2 rooms and 1 front window. They had a cow house and a piggery. This was a private dwelling.

Lugganimma is in the civil parish of Kilcummin.