You are here: Home>Places>Townlands of The Oughterard Poor Law Union>Inishool>Inishool 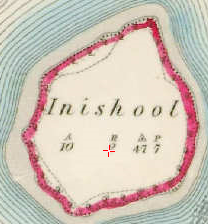 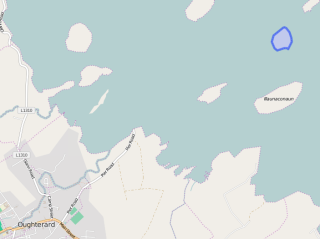 Inishool is in the Electoral Division of Oughterard, in Civil Parish of Kilcummin, in the Barony of Moycullen, in the County of Galway

Inishool contains 10½ acres all under tillage with some scattered bushes situated N. of Illauncunnaun, and S. of Cussafoor Island.

In Lough Corrib it belongs to the townland of Portacarron.

John Furdon was the Occupier

Marianne Nolan was the Immediate Lessor.

William Furdon was listed as the occupier of Inishool & Inishbeagh, a total of 14 acres 1 rood and 34 perch of land with a total rateable valuation of £3-15s-0d.

A townland is one of the smallest land divisions in Ireland. They range in size from a few acres to thousands of acres. Many are Gaelic in origin, but some came into existence after the Norman invasion of 1169. Inishool is a townland.

No-one listed as living on Inishool

Inishool is in the civil parish of Kilcummin.