You are here: Home>Places>Townlands of The Oughterard Poor Law Union>Illeny>Illeny 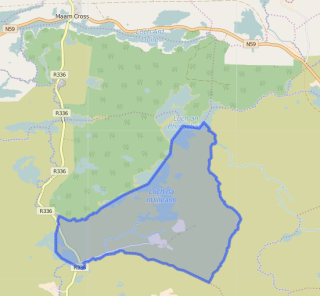 Parish: Kilcummin View all place names in this civil parish.

Illion in Donegal and Galway; Uillinn, an elbow. Illeny in Galway, the Irish plural, Uillinidhe : elbows. From shape.

Illeny contains 1,183½ acres of land about 15 acres of which are tillage and pasture and 158½ acres of water, a bye road partly along its western boundary and an old road which extends from E. to S. thro. townland

Situate in the northern extremity of the parish. Bounded on the N. by Ardinynagluagh, on the E. by Leam West, on the W. by Cruckadaav and on the S. by Glantrasna. townlands.

The Tithe Applotment Books are in a variety of formats, from a few pages sewn together to elaborately bound volumes. In most cases they are written in manuscript throughout, although some consist of manuscript entries on printed questionnaires. The information in the books is broadly uniform and generally includes at least the name of occupier, the size of holding, the valuation and the tithe payable. In some cases more detailed information is provided. Some volumes have maps and most have certificates and correspondence attached.

A townland is one of the smallest land divisions in Ireland. They range in size from a few acres to thousands of acres. Many are Gaelic in origin, but some came into existence after the Norman invasion of 1169. Illeny is a townland.

This is a return of the member of the family; their Visitors, Boarders, and Servants who slept or abode in their house on the night of 31st of March 1901 in Illeny. There were 4 buildings listed in the Townland of Illeny. 1 was occupied; 2 others were Fish Watch Houses. All 6 (2 males/4 females) living in Illeny were Roman Catholics.

People that lived in Illeny were born included Co. Galway. There were a total of 1 farm building and out offices; which was a piggery.

Walls of the houses: The walls were of stone, brick, and concrete or of mud, wood or other perishable material. The house in Illeny was built of stone, brick or concrete. There were no mud cabins.

They lived in a 3rd class house with 2 rooms and 1 front window. They had a piggery. This was a private dwelling

This is a return of the Members of the families in Illeny, their visitors, boarders and servants who slept or abode in the house on the night of Sunday 2nd April 1911.

All 16 (7 males/9 females) living in Illeny were Roman Catholics.

People that lived in Illeny were born included Co. Galway. There were a total of 6 farm buildings and out offices; which included a stable, coach house, cow house & piggeries.

House & Building Return (no details entered on this form)

Pat was a farmer. There entire family could not read; they spoke only Irish.

Pat & Mary were married for 16 years; they had 7 children with 5 living at the time of the census. The family were Roman Catholic.

They had a piggery.

Colman Nee aged 30 was head of the family; married to Bridget aged 38, living with them was a relative Joseph McDonagh aged 20.

Colman was a farmer and Joseph was a general servant.

Colman & Bridget were married for 3 years. The family were Roman Catholic.

They had a piggery.

Michael Nee aged 35 was head of the family; married to Margaret aged 27. They lived with their daughters Mary aged 3 & Anne aged 1 and a visitor Bridget Walsh aged 72, a widow.

Michael was a farmer. Michael, Margaret & Bridget could read & write. Mary & Anne could not read or write. The entire household spoke Irish & English.

Michael & Margaret were married for 6 years; they had 2 children with both living at the time of the census. The family were Roman Catholic.

They had a stable, coach house, cow house and a piggery.

Church records of births, deaths and marriages are available online at http://www.rootsireland.ie. To search these records, you will need to know the ‘church parish’ rather than the ‘civil parish’. (The civil parish is the pre-reformation parish and was frequently used as a unit of administration in the past.

Illeny is in the civil parish of Kilcummin

In general, the civil parish and the Church of Ireland parish are the same, but this is not always the case

You can use this link to view a map of archaeological features.

This link brings you to a website wherein you will have to search for your townland.