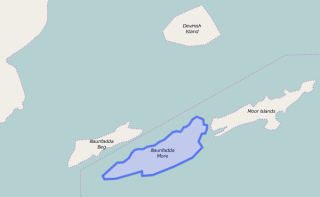 Illaunfadda More is in the Electoral Division of Wormhole, in Civil Parish of Kilcummin, in the Barony of Moycullen, in the County of Galway

Parish:  Kilcummin View all place names in this civil parish.

Illaunfadda More contains 10¾ acres, all under pasture. There is a Trig Station situate in the northern extremity of the island. Situated S. of Illaunfaddabeg and Long Island (E.).

Situation: In Lough Corrib, it belongs to the townland of Birch Hall.

Illaunfadda More had an area of 26 acres, 3 rood & 10 perch. The tenants of the townland of Curraveha/Birchall were the occupiers of this island. On the Griffiths Valuation; Illaunfadda More is listed with Devinish, Inishflynn & Two Moor Islands; therefore, there is not an actual breakdown of the actual rental valuation for this island. The total valuation of the islands was £7 10s 0d.

Tithes were a tax on agricultural produce which was payable by the occupiers of agricultural land. They were the main source of income for the parish clergy of the Church of Ireland (the largest Protestant church and the church established by law). However, in many parishes a large part of the tithes were ‘appropriate’, which meant that they were payable to a bishop, cathedral chapter or other ecclesiastical recipient, or were ‘impropriate’, which generally meant that they were payable to a local landowner. The parishes used in the Tithe Applotment Books are civil or Church of Ireland parishes, which often differ in name and territory from Catholic parishes,

Acts of Parliament of 1823 and 1832 provided for the conversion of tithes into a fixed charge on land, and specified the average price of wheat or oats in the parish in the seven years before 1821 as the basis on which the tithes would be calculated. They also extended the application of tithes to pasture, where previously they had been levied only on tillage.

The following information is linked to Illaunafaddamore on the Galway Library Website, on the original document it is not referred to as Illaunafaddamore but as The Large Island (I am not 100% certain that this is correct as the total acreage is 70 acres, far larger than the island of Illaunafaddamore..

Illaunfadda More is a townland.

Illaunfadda More is in the civil parish of Kilcummin.