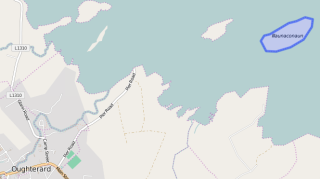 Illaunaconaun is in the Electoral Division of Oughterard, in Civil Parish of Kilcummin, in the Barony of Moycullen, in the County of Galway

Parish: Kilcummin View all place names in this civil parish.

Illaunaconaun contains 26¼ acres all under tillage and pasture together with a few patches of brushwood, it is also inhabited.

Situated E. of Illaunachurabra and S. of Innishhool, in Lough Corrib, it belongs to the townland of Portacarron.

No information available for Illaunaconaun.

The Tithe Applotment Books are in a variety of formats, from a few pages sewn together to elaborately bound volumes. In most cases they are written in manuscript throughout, although some consist of manuscript entries on printed questionnaires. The information in the books is broadly uniform and generally includes at least the name of occupier, the size of holding, the valuation and the tithe payable. In some cases, more detailed information is provided. Some volumes have maps and most have certificates and correspondence attached.

Occupiers of the Land: The land was farmed or herded by Loughlin Hanly & Patrick Beahan.

The out office was a farm building, a cow house, piggery or barn. The land was very poor and sterile and people were always poverty-stricken. At this time most tenants were trying to eke out a living on 5 acres or less and a farmers needed at least 15.3 acres to survive.

A townland is one of the smallest land divisions in Ireland. They range in size from a few acres to thousands of acres. Many are Gaelic in origin, but some came into existence after the Norman invasion of 1169. Illaunaconaun is a townland.

This is a return of the members of the family, visitors, boarders or servants who slept or abode in their house on the night of Sunday March 31st 1901 in Illaunaconaun.

There were 2 houses listed in the Townland of Illaunaconaun. The people were all Roman Catholics – 10 males and 8 females a total of 18 persons and they were born in County Galway. There were 11 in total of farm buildings and out offices which included, cow houses, calf houses, piggeries, fowl houses and barns.

Walls of the houses: The walls were of stone, brick, concrete or of mud, wood or other perishable material. The houses in Illaunaconaun were built of stone, brick or concrete. There were no mud cabins.

Landholder of the property unless otherwise stated was the lawful owner.

House Occupancy: Each of the 2 houses was occupied by one family.

The people listed as Head of the Family were also listed as the lawful Landholder of the property.

They lived in a 2nd class house with 2 rooms and 3 front windows. They had a cow house, piggery, fowl house & a barn.

John was an Army pensioner and farmer. Thady & Andy were farmer’s sons, Maria was a farmer’s daughter & Thomas was a scholar.

They lived in a 2nd class house with 2 rooms and 3 front windows. They had a cow house,  2 calf houses, piggery, 2 fowl houses & a barn.

This is a return of the Members of families in Illaunaconaun, their visitors, boarders and servants who slept or abode in the house on the night of Sunday the 2nd of April 1911.

Description of the Houses

All the houses in Illanaconaun were listed as private dwellings and were built of concrete or stone.  The roofs of the houses were of wood, thatch or other perishable material. Most likely they were thatched. The head of the family were listed as the landholders. The Class of the house depended on the material used in the roof, walls, number of rooms and number of front windows. Most of the houses came under “2’ in the census form meaning that there could be 2, 3, or 4, rooms in the house. There were 8 males and 6 females living in the townland. They had 9 farm buildings.

Patrick & Mary were married for 24 years; they had 12 children with 11 living at the time of the census.

They lived in a 2nd class house with 2 rooms and 3 front windows. They had a cow house,  calf house, piggery, fowl house & a barn.

John Lydon aged 76 was head of the family; married to Honor aged 64. They lived with their children Timothy aged 33 & Maria aged 30, both single.

John & Honor were married for 43 years; they had 9 children with 8 living at the time of the census.

They lived in a 2nd class house with 2 rooms and 3 front windows. They had a cow house, piggery, fowl house & a barn.

Illaunaconaun is in the civil parish of Kilcummin.


Information from the National Monuments Service: