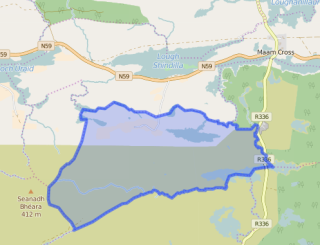 Derroogh North is in the Electoral Division of Turlough, in Civil Parish of Kilcummin, in the Barony of Moycullen, in the County of Galway

Derroogh North contains 1,143¾ acres of land all mountain bog except about 40 acres of tillage and pasture. A bye road passes through its centre. It also contains 88½ acres of water.

James Blake is a member of the Blake (Drum, Tully and Gortnamona) family.

No information in The Tithe Applotment Books for Derroogh North.

Occupiers of the Land: Patrick Joyce.

Immediate Lessor: The Directors of the Law life company.

A townland is one of the smallest land divisions in Ireland. They range in size from a few acres to thousands of acres. Many are Gaelic in origin, but some came into existence after the Norman invasion of 1169. Derroogh North is a townland.

An application was made by Costello from Deroogh in the Parish of Kilcummin in the Barony of Moycullen. Reference # Cen/S/2001. The surname Folan also appears on the application. Record was found for 1851.

An application was made by Costello from Deroogh in the Parish of Kilcummin in the Barony of Moycullen. Reference # Cen/S/2002.  Record was found, no year indicated.

Full Names of Father and Mother of the applicant: Mich & Maria Costello (Folan)

This is a return of the members of the family, visitors, boarders or servants who slept or abode in their house on the night of Sunday March 31st 1901 in Derroogh North.

There was 1 house listed in the Townland of Derroogh North. The people were all Roman Catholics and they were born in County Galway. There were 2 males and 2 females in the townland and they all lived in a private dwelling. There were 3 in total of farm buildings and out offices which included, 2 cow houses a stable.

Thomas was a herd; Nora was a housekeeper & Bridgie was a scholar. Thomas & Patrick could not read or write; Nora & Bridgie could read & write. Thomas, Nora & Bridgie spoke Irish & English.

They lived in a 3rd class house with 2 rooms and 2 front windows. They had a stable & 2 cow houses. This was a private dwelling. Thomas Francis Joyce was the landlord.

There is no record of anyone living in Derroogh North in 1911.

Derroogh North is in the civil parish of Kilcummin.

Tim Robinson’s townland index for Connemara and the Aran Islands