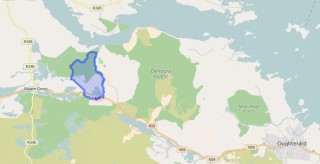 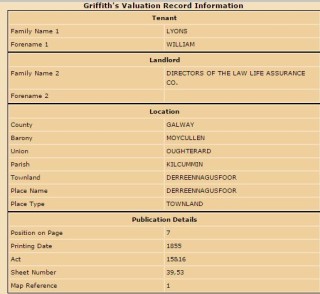 Derreennagusfoor is in the Electoral Division of Letterfore, in Civil Parish of Kilcummin, in the Barony of Moycullen, in the County of Galway

Translation: little derry or oak wood of the cold feet

Derreennagusfoor is a wet, swampy mountain flat, it contains 688 acres of land. There is about 20 acres of arable and 74 water, the remainder is mountain, an old road forms the southern boundary of this townland.

It is situated in the northern extremity of the parish. Bounded on the N. by Lackavrea, on the S. by Bunnacul, E. by Taunaghbeg, Tullaghmore, Derreeghter and Derryherbert and W. by Derrynagloragh and Lurgan townlands.

The Down Survey is a mapped survey. Using the Civil Survey as a guide, teams of surveyors, mainly former soldiers, were sent out under Petty’s direction to measure every townland to be forfeited to soldiers and adventurers. The resulting maps, made at a scale of 40 perches to one inch (the modern equivalent of 1:50,000), were the first systematic mapping of a large area on such a scale attempted anywhere. The primary purpose of these maps was to record the boundaries of each townland and to calculate their areas with great precision. The maps are also rich in other detail showing churches, roads, rivers, castles, houses and fortifications. Most towns are represented pictorially and the cartouches, the decorative titles, of each map in many cases reflect a specific characteristic of each barony. http://downsurvey.tcd.ie/
Townland of DERREENNAGUSFOOR

Occupiers of the land

View the heads of households in the townland at this time

In Ireland the Poor Relief Act of 1838 divided into districts or “unions” in which the local taxable inhabitants were to be financially responsible for all paupers in the area. In 1898 the Poor Law Union was adopted as the basic administrative division in place of the civil parish and barony. Further subdivision into 828 registration districts and 3,751 district electoral divisions followed. Town lands were not arranged according to these divisions with parish and barony retained as a means to make comparisons with records gathered before 1898.

The out office was a farm building, a cow house, piggery or barn. The land was very poor and sterile and people were always poverty-stricken. At this time most tenants were trying to eke out a living on 5acres or less and a farmer needed at least 15.3 acres to survive.
Townland information:

Derreennagusfoor is in the civil parish of Kilcummin.