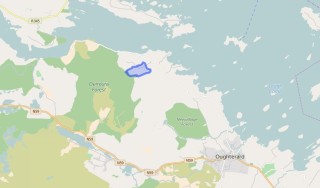 Curraghduff East contains 147 ¼ acres, about 111 acres under tillage and pasture, the remainder bog.

Curraghduff East is situated in the Northern extremity of the parish.

The out office was a farm building, a cow house, piggery or barn. The land was very poor and sterile and people were always poverty-stricken. At this time most tenants were trying to eke out a living on 5acres or less and a farmer needed at least 15.3 acres to survive.

A town land is one of the smallest land divisions in Ireland. They range in size from a few acres to thousands of acres. Many are Gaelic in origin, but some came into existence after the Norman invasion 1169. Curraghduff East is a townland.

All 13 People that lived in Curraghduff East were born in Co. Galway.

There were a total of 5 farm buildings and out offices which included stables, cow houses & piggeries.

Walls of the houses: The walls were of stone, brick, and concrete or of mud, wood or other perishable material. The house in Curraghduff East was built of stone, brick or concrete. There were no mud cabins.

House Occupancy:  2 Houses were occupied on the night of the Census, 1 house was unoccupied.

They lived in a 3rd class house with 2 rooms & 2 front windows.  They had a stable & a cow house. This premise was a Private Dwelling.

They lived in a 3rd class house with 2 rooms & 2 front windows.  They had a piggery & 2 cow houses. This premise was a Private Dwelling.

This is a return of the Members of the families in Curraghduff East, their visitors, boarders and servants who slept or abode in the house on the night of Sunday 2nd April 1911.

People that lived in Curraghduff East were born included Co. Galway. There were a total of 4 farm buildings and out offices which included a stable & cow houses.

They lived in a 3rd class house with 2 rooms & 2 front windows.  They had a stable & a cow house. This premise was a Private Dwelling.

Martin was a farmer, Catherine was a farmer’s wife, Joseph & Matthias were farmer’s sons; John was a scholar; Bridgid, Catherine & Annie were farmer’s daughters. The entire household could read, write & spoke Irish & English. Martin & Catherine were married for 34 years; they had 10 children with 7 still living at the time of the census.

They lived in a 3rd class house with 2 rooms & 2 front windows.  They had 2 cow houses. This premise was a Private Dwelling.

Curraghduff East is in the civil parish of Kilcummin.

You can use this link to view a map of archaeological features.   Archaeological map from the National Monuments Service