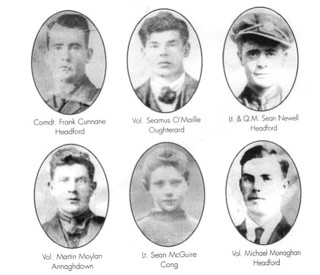 I grew up in Tuam next to the old workhouse or ‘The Home’ as it was known to me. I listened to the many stories surrounding this ancient building. I was particularly captivated by one story – the executions of six brave men in 1923. Their executions cast a gloom over the town and everyone felt the greatest sympathy for the families and relatives of the executed men.

Tuam Town Commissioners at their meeting on April 17th 1923 unanimously passed a resolution recording, ‘disapproval and sorrow at the executions.’ The resolution ‘equally condemned attacks on the National forces and reprisals by whomsoever committed’ and asked Dr. Gilmartin archbishop of Tuam and through him other Bishops of Ireland to use their influence with the Free State Government to have such executions stopped.

The six men were  Seamus Ō Máille Oughterard, Martin Moylan, Farmerstown, Annaghdown, John Newell, Winefort, Headford, John Mc Guire, Cross, Cong,  Michael Monaghan, Clooneen, Headford, and Frank Cunnane Kilcoona, Headford were brought from Galway Jail where they were detained following their capture to Tuam Workhouse. All were charged with having possession of a rifle and ammunition at Cluid, Headford on February 19th 1923 without proper authority. All six persons were found guilty. The findings confirmed in each case and the prisoners were sentenced to death. On Monday morning the Bishop of Galway, Dr. O’Dea died and so followed a period of mourning that lasted until his funeral on Thursday, April 12th. The six men were taken aside in Galway Jail and told that they would be executed at 8a.m. the next day not in Galway but in Tuam Workhouse.

The Connacht Tribune of the following Saturday, April 14th describes the event: “The condemned men, it is stated, went to their doom firmly and with brave hearts. They wrote their final letters. They had been attended during the night by two of the town priests and in the morning heard mass, at which two of them served. The priests were with them to the last.

At about 8a.m. two volleys were fired and it is stated that the condemned men were taken out in parties of three each, lined up by the Oratory wall, blindfolded and their hands joined as in prayer. They had prayed fervently during the night before and in the morning and were fully consoled to meet their Creator. The six bodies enclosed in six coffins were interred in consecrated ground within the Workhouse.

Word spread by mouth throughout that fateful day in Headford and Caherlistrane. At nightfall, John Francis Rattigan ventured from the dugout only to return with the saddest of news. They did not know, but more bad news was on the way. The night before, April 10th, General Liam Lynch Chief of Staff lay mortally wounded on the slopes of Knockmealdown in Tipperary, another blow to the defence of the Republic.

Later in 1923 when the Free State vacated the Workhouse they exhumed the bodies and brought them to Athlone. Towards the end of April the order to down arms was given and during the next year all prisoners were released.

1924 the six men executed at Tuam with 18 other executed republicans from Tralee, Dundalk, Ennis, Kilkenny, Limerick, Cork, Athlone, Curragh, Wexford, Waterford and Carlow were handed over at a ceremony in Athlone at intervals of 10 minutes each.   The military chaplain officiated and Major General Mc Keown of the Western Command and a number of staff officers were present. Each coffin passed out by the West Gate of the barracks, into the public square, military honours were rendered by the guard

Notwithstanding the inclemency of the weather, a drenching downpour continuing from early morning, a large crowd had collected in the square, or market place, opposite the West gate of Custume Barracks. Many of the spectators were women and girls. Shortly after 11 o’clock, about 20 motor vehicles and a motor hearse arrived and were lined up from the Market Square, along the bridge to Custume Place. A few minutes before 12 o’clock a guard of honour of the I.R.A. arrived and was formed up in double line facing the entrance gate to the barracks.

The bodies in addition to the coffins they were originally buried in were encased in large over sized oak coffins, stained yellow. Friends travelled from North and South the previous day and stayed over night in Athlone. Seamus Ō Máille Oughterard was the first of the executed six in Tuam on 11th April 1923 to be handed over followed by John Newell, Headford, Martin Moylan,  Annaghdown, John Maguire, Cross, Co. Mayo, Francis Cunnane, Kilcoona, Headford, and Michael Monaghan, Headford.

The coffins were draped in the Republican Tri-colour, and bore a breastplate provided by the relatives on which was inscribed in Irish, the name, date of death and age of the deceased. The spectacle presented after the coffins had been removed from the Barracks, was a never-to-be-forgotten one a grim reminder of the unfortunate division between comrade Irishmen which was the result of Mr De Valera’s refusal to accept the Treaty. Others would maintain that it was the acceptance of the Treaty of Surrender and the armed overthrow of the All-Ireland Republic caused ‘the unfortunate division between comrade Irishmen.

The funeral cortege made its way from Athlone to Tuam and from there to Headford. In Tuam a large crowd remained on the streets awaiting the arrival of the funeral and although there was a heavy downpour of rain and the remains did not arrive until 11.30p.m., the people stood waiting. As the funeral cars drove slowly through the town, heads were uncovered, and soldiers and Civic guards saluted. Spanning some of the principal streets were streamers with mourning crosses in Republican colours.

There was no delay in Tuam and all the cars proceeded on to Headford where they arrived at 1.30a.m. On passing Belclare the church bell tolled, this lending a solemn sadness to the countryside around, at that late hour of the night. The remains were left overnight in Headford church where the rosary was recited.’

The comrades of the executed six in the North Galway Brigade¸ I.R.A., stood guard. The following day October 30th 1924 High Mass was offered in Headford and the remains of John Maguire was conveyed to Cross Cong, Seamus Ō Máille to Oughterard where he was laid to rest in the Republican Plot and the others were interred in the Republican plot in Donnaghpatrick Burial Ground. A general day of mourning was held in Tuam and the surrounding towns by having business suspended during the day.

The six brave men gave their lives for their belief in the establishment of an All-Ireland Republic.