Some lines inspired by a visit to my uncle’s grave in France on 11th September 2014. 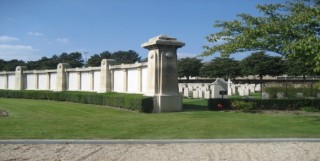 Albert Alexander Lyons left home to join the South Irish Horse regiment in Dublin on 5th August 1914 just four months after his 18th birthday. He died from illness contracted on active service in March 1915 and it was 99 years before a member of his family managed to visit his final resting place in France.

At St. Sever cemetery near Rouen

The chalk-white head- stones stand in a sea of ordered rows.

In silence, each one marks the final resting place

Of soldiers from that area or of those who died nearby.

On the 5th of August 1914, Albert left his boyhood home

Just one day after joining up in Oughterard.

Like all the rest who set off to go to war,

He believed he’d be home again for Christmas.

A Christmas card arrived all right to wish his parents well

And then, in March, the dreaded telegram with news of his demise.

He had gone to join his twin, young Arthur James,

Who he – at just three months – would have never known.

On that chalk-white Portland stone,

His name and regiment appear with age nineteen

And down below the words by someone chosen,

In intervening years of ninety-nine he had not grown old

But lay in wait for a first family member

And there to leave behind a horse – shoe brought from home

Like those, as Shoeing Smith, on anvil, he had so often sized and shaped.