You are here: Home>People>Mick Molloy>The Mighty Molloy - Interview with Mick Molloy in 1974

The Mighty Molloy - Interview with Mick Molloy in 1974 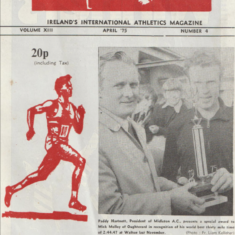 Mick Molloy on the cover of Marathon Magazine April 1975 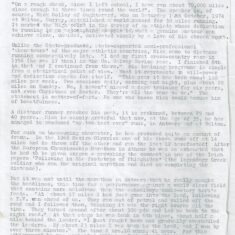 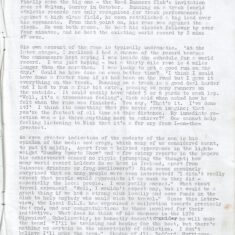 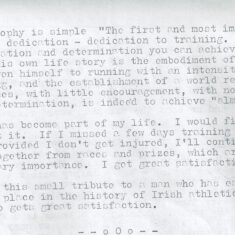 The mighty Molloy
“On a rough check, since I left school, I have ran about 70,000 miles close enough to three times round the world”.  The speaker is, of course, Mick Molloy of Oughterard who on Saturday 12th of October 1974 at Walton, Surrey, established a world record for 30-mile running. It marked the high point in the career of an athlete whose dedication to running is an astonishing example of what a genuine amateur can achieve alone, unaided, motivated simply by a love of his chosen sport.

Unlike the State-produced, state-supported and semiprofessional ‘shamateurs’ of the major athletic countries, Mick came to distance running comparatively late. “I had my first cross country race in 1956 (he was 17 then) in the Co. Galway novice race. I finished eighth in that, and I continued from there.”  His training program is simple from a statistical point of view.  What it represents in willpower and dedication speaks for itself. “This year it has been about 150 miles per week. Two sessions daily, morning and night, plus about 20 miles on Sunday.  No, I haven’t missed a day’s training for six years, not even Christmas or Easter. They’re all the same to me”.  The statement is matter of fact. No one who knows Mick could accuse him of boastfulness.

A distance runner reaches his peak, it is reckoned between 25 and 40 years. Mick is simply grateful that now, at the age of 35, he managed to produce “my two best ever” runs in Antwerp and at Walton.

For such an unassuming character, he has produced quite an amount of drama. In the 1968 Mexico Olympics one of his shoes came off at 14 miles and he threw off the other and ran the last 12 barefooted! After the European Championships Marathon in Athens, he was so exhausted that he had to be given oxygen provoking the comment in one of the Irish papers “Following in the footsteps of Phiaphides’ (the legendary Greek soldier who ran the original marathon and died in completing the distance).

But it was not until the marathon in Antwerp that he really caught the headlines, this time for a performance against a world class field that contains more melodrama than schoolboys comic-story heroes feats. “At about 17 miles I had just gone into the lead, following a T.V. van ahead of us. They ran out of petrol and pulled off the road and I followed them, thinking it was the right course all the time.  They turned around after about 300 yards and led me back to the right road.” At this stage he was back at 6th place, about half a mile behind the leader. “ I just fought back and gradually overhauled the leaders. By 23 miles, I was back in the lead, and I won by over three minutes. The time 2 hours 18 minutes and 41 seconds.  For this achievement he was nominated Athlete of the Month (September) in the National Dairy Council Awards.

Finally came the big one – the Road Runners Club’s invitational race at Walton, Surrey in October. Tunning on a track (world athlete records are only recognised for their track performances) against a high-class field, he soon established a big lead over his opponents. From that point on, his race was against the clock. He won both races. He beat his closest follower by over four minutes, and he beat the existing world record by 2 minutes and 47 seconds.

His own account of the races typically undramatic. “At the later stages, I realized I had a chance at the record because the announcers kept saying I was inside the schedule for a world record. I was just hoping – but a thirty miles race is 4 miles longer than the marathon. I was lucky to get a good run on the day.  Could he have done an even better time?  ‘I think I could have done a faster time if it had been on the road, but I gave it everything on the track. Running on a track is a good deal harder and I had to run a fair better extra, passing so many runners on the outside. It could easily have added 5 or 6 yards to each lap. “Well, it’s a tremendous feeling”, Mick said when asked how he felt when the race was finished. You say, that’s it, I’ve done it. I think it’s something that you never even imagine; that you’re the fastest of all time at this distance. My immediate reaction was – is there any more to achieve? One cannot help feeling listening to Mick that it’s a far cry from ‘I am the greatest’.

An even greater indication of the modesty of the man is his opinion of the media coverage, which many of us considered scant, to put it mildly. Apart from a belated appearance in the lightweight “Sunday Sports Show’ and a few skimpy reports in the papers his achievement caused no ripple (prompting the thought; how many world record holders do we have in Ireland, apart from Guinness drinkers or frog swallowers?) Mick seems genuinely surprised that so many people were even interested, “I really didn’t expect the people would appreciate it as much as they did – especially the local people. I was really amazed”. What about travel expenses? “Well, I wouldn’t expect any, but it would be a great thing if we had a strong club locally and some funds in the club to help anyone who wish to travel.” Since this interview, the local B.L.E. has organised a collection towards precisely that end, and our congratulations to those involved for their initiative. What does he think of his chances in the 1976 Olympics? Unbelievably, he honestly doesn’t consider he will make the team. “I’ll be training and hoping for the best, but there’s nothing so certain as the uncertainty of athletics. I don’t believe I’ll make the team.” Shades of Ali, Bedford, Hurricane Higgins and all other ‘Greatest’.

“Running has become part of my life. I would find it hard to do without it. If I missed a few days training I wouldn’t feel right. Provided I don’t get injured, I’ll continue to train – apart altogether from races and prizes, which are really only of secondary importance. I get great satisfaction from it.

In paying just a small tribute to a man who has earned an honoured place in the history of Irish athletics, the Newsletter too, gets great satisfaction.