You are here: Home>New contributions>John Henry Joyce and the story of The Nine Irons

John Henry Joyce and the story of The Nine Irons 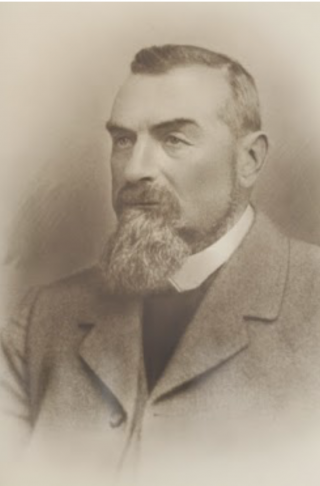 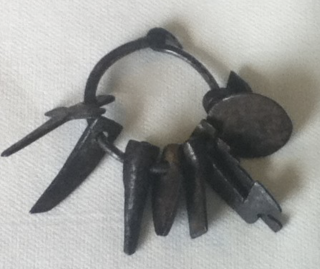 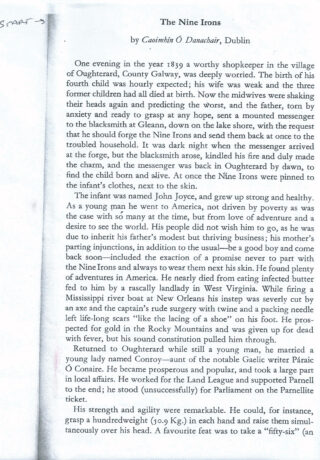 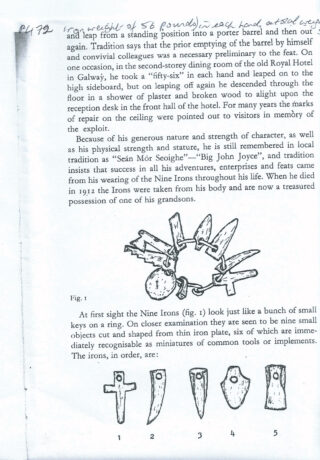 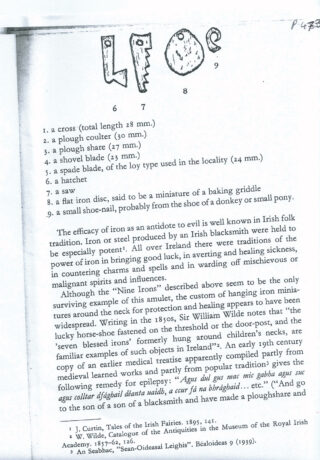 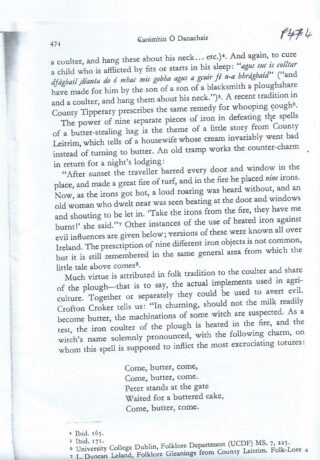 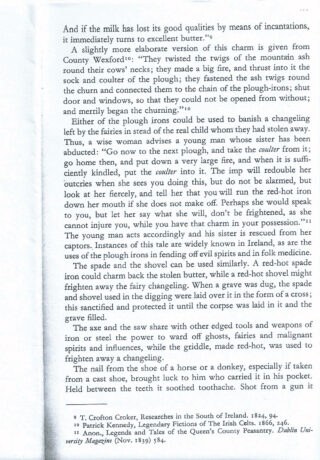 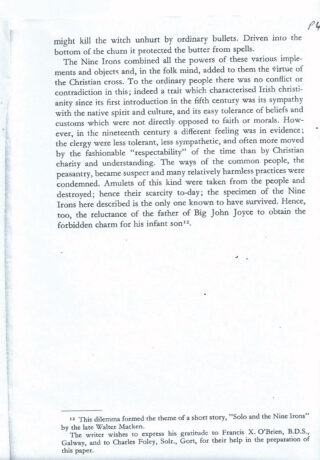 I am currently researching the story of my great-grandfather, who was also known around Oughterard as Séan Mór Seoighe, and the bracelet of nine irons which was fashioned for him by a blacksmith in Glann at his birth in 1838. It seems that iron was regarded as an antidote to evil and this amulet was believed to outwit demons and fairies. The first two sons of his mother, Mary Anne Conroy (the aunt of the writer Padraic O’ Conaire) and Andrew Joyce died at birth; hence the request for this bracelet which would afford protection to John Henry.
From the photo below of the original iron bracelet – the only intact one of its kind in Ireland at present – you can see the following irons, most of which were farming implements: a plough share, a plough coulter, the blade of a shovel, the blade of a spade, a hatchet, a saw, a baking gridle, the shoe nail of a small pony and a cross which I presume was added to appease the clergy who were at odds with the blacksmiths who promoted this piseog.

Caoimhín O’ Danachair (Kevin Danaher) published an article entitled The Nine Irons in 1973. Apparently, Walter Macken knew my father’s people in Oughterard and based his short story ‘Solo and the Nine Irons’ on my great-grandfather’s story. This story is in Macken’s collection ‘God made Sunday and Other Stories.’

In more recent years Jim Higgins has done a lot of research into the Nine Irons bracelet and has written about then in ‘An Example of The Nine Irons from County Clare.’ Jim has generously shared his in depth knowledge and research with me.
Mr. Eamonn King from Glann very kindly showed me the site of the forge at Gorterwulla some years ago and I am indebted to Mark and the late Mary Canavan on whose land the site stands.
My research has taken me to your impressive website. I have spoken with Mary Kyne who kindly suggested I write a little of the background of the Nine Irons here. My hope is that someone reading this may have heard of this practice of blacksmiths making such amulets in your area, perhaps back in your grandparent’s or great-grandparent’s time. It would mean so much to me to be able to further my research in order to finally publish the memoir of John Henry Joyce (1938-1915).

Any stories or information at all would be most welcome. You may also have heard of some of the feats of strength of John Henry who was said to be able to jump into and out of a barrel of porter from standing. On one occasion he is said to have answered just such a challenge upstairs in the erstwhile Odeon Hotel in Eyre Square and came through the roof to surprise the wedding party below. If you have heard any such tales (tall or otherwise!), I would really love to hear of them. He did seem to be a tall strong looking man from the few photos I’ve seen of him. Perhaps the bracelet of Nine Irons which he apparently wore throughout his life was responsible for his legendary strength and athleticism!

If you have any information or stories in relation to the Nine Irons or indeed about my great grandfather John Henry Joyce, Oughterard 1838-1915, I would really appreciate if you emailed me at bredajoyce@gmail.com