From the ESB archive 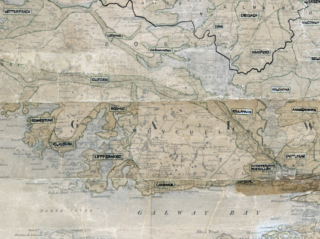 There were a number of good hotels in Oughterard according to The REO News from January 1951
Oughterard Area: The post-construction report on Oughterard Area points out that, agriculturally speaking, the area is very poor and that it is unlikely that the use of electricity for agri cultural purposes will be very high. Almost half the consumers in the area live in the town of Oughterard and the surrounding groups. There are a number of good hotels in this region and also a number of good residential premises occupied by retired professional folk, and it is anticipated that the domestic application of electricity will be fairly good in this region.
The number of economic acceptances has been increased from 338 to 351 in spite of 65 ‘backsliders’. The corresponding revenue has in creased from £2,210 to £2,278. As against this, capital cost has been exceeded by £1,600 with a net result that the return from the area now shows 8.75% as against the 9.05% originally estimated. A factor which militated against a better return was that it was not possible to con clude arrangements with the County Council Quarry for supply. This had been allowed for in the design and bore an Equivalent Fixed Charge of £100 p.a. There is a factory in Moycullen manufacturing concrete pipes. At present it has a load of 31 H.P., but with the availability of supply intends to expand to a total requirement of about 70 H.P. It is of interest to note that the old petrol plant in the factory gave up the ghost three days before supply was switched on.
Principal sales in the area amounted to £360, including 4 – 3 plate Cookers: 1 – 2 plate Cooker: 2- Washing Machines: 1 Refrigerator: 2- Vacuum Cleaners: 1 – 30 gal. Waterheater: various Irons and Kettles.